West Indies out of World Cup 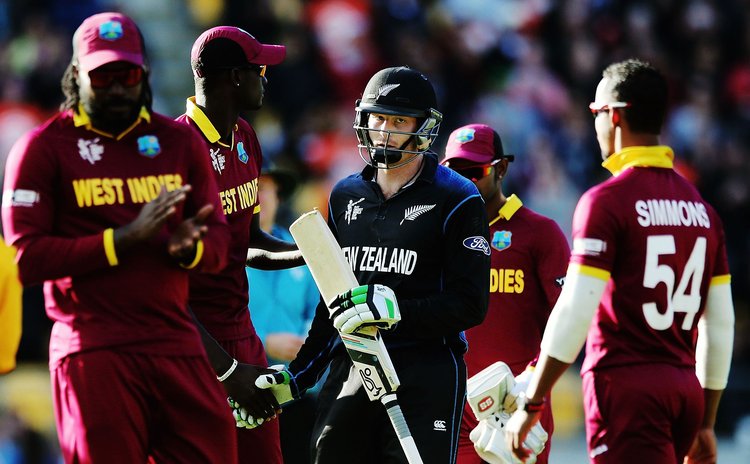 Wellington March 21, 2015- A dropped catch by Marlon Samuels may have cost West Indies the quarter finals match against New Zealand on Saturday.

In the first over of the match Samuels grassed Martin Guptill at square leg when he was four. The opener went on to a record 237 and carried his bat throughout the innings. He scored more than sixty percent of New Zealand's total score.

But West Indies apparently did not want to win that match and Samuel's dropped catch was just one incident in another lackadaisical performance in the field by the Caribbean team.

"The West Indian effort in the field was listless," the ESPN CricInfo reported. "Samuels' dropped chance was the stand-out, but the first ball of the game was ominous: Jason Holder and Sulieman Benn both lethargically pursued Guptill's straight drive. They could have saved the boundary, but didn't. West Indies became more disheartened as the innings wore on, and more mistakes were made"

In an article entitled "Sloppy West Indies lacked intent, hunger" George Binoy of Cricinfo wrote: "West Indies should have been fired up for a winner-takes-all match against one of the two hottest sides in the World Cup. New Zealand had everything to lose, and yet West Indies were flat long before Martin Guptill flattened them."

Guptill's unbeaten 237 was the highest World Cup score of all time and the second-highest in all ODIs. His 163-ball innings featured 24 fours and 11 sixes, and he alone scored 92 of New Zealand's 153 in the final ten overs.

New Zealand will now host South Africa at Eden Park on Tuesday in a semi-final match and the West Indians, the most inconsistent and can't- care-less team in world cricket go home.