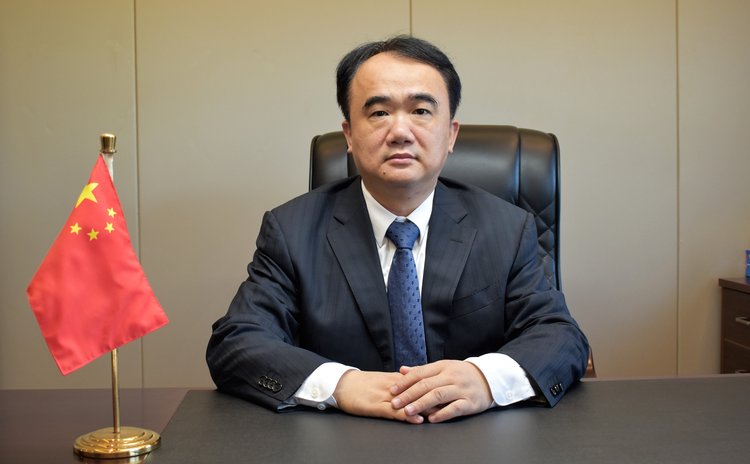 The XXIV Olympic Winter Games is about to open. As the first "Dual Olympic City" in history, Beijing is ready to present a simple, safe and splendid Winter Olympics to the world.

In the summer 14 years ago, the Beijing Olympic Games amazed the whole world with an unforgettable memory for many people. Dominican athletes Chris Lloyd and Erison Hurtault took part in track and field events. Then President Nicholas Liverpool and Prime Minister Roosevelt Skerrit visited Beijing to watch the games and attended the closing ceremony, highly applauding the success of the Beijing Olympic Games.

Today, we still have the confidence to bring new surprises to the world. In 19 competition days, 2,892 athletes from all over the world will compete in 7 major events, 15 sub-events and 109 minor events including skiing, skating, ice hockey, curling, snowmobiles, sledding and biathlon. While international audience cannot come to Beijing to watch the Winter Olympics first hand for COVID-19 prevention and control reasons, the application of the latest technologies, including 4K and 8K ultra-high definition live broadcast, artificial intelligence, virtual reality, 5G and so on, will provide more audience around the world with a better online watching experience. For all participants, China has also taken meticulous and effective measures to prevent infections, so as to ensure their safe participation and the orderly conduct of the whole competition.

I learned that people in Dominica love sports, especially cricket, football and athletics events. As "Nature Island of the Caribbean" is located in the tropics, many people don't know much about ice and snow sports, nor the Winter Olympics. However, be it Summer Olympics or the Winter Olympics, it is not only the arena for top athletes to compete, but also the source of Olympic spirit for mankind. At present, the COVID-19 pandemic has not subsided, and the international landscape remains complicated and changeable. The official motto for Beijing 2022 is "Together for a Shared Future", which encourages all mankind to face difficulties and look forward to tomorrow together. It advocates the common goal of pursuing unity, peace, progress and inclusiveness. It promotes the Olympic spirit of being faster, higher, stronger and more united. It expresses the common desire of the world to join hands for a better future. Its significance and value will be shared by all mankind.

For some time, a few countries politicized sports, trying to obstruct the successful holding of Beijing Olympic Games by means of so-called "diplomatic boycott" to achieve their own political goals. However, what the whole world expects is unity, cooperation and the success of the Winter Olympics, leaving their attempt particularly vulnerable. On December 2, the 76th Session of the United Nations General Assembly adopted by consensus the resolution on Olympic Truce for the Beijing Winter Games, which is drafted by China and the IOC and co-sponsored by 173 countries. So far, 32 international dignitaries, including Russian President Vladimir Putin, Kazakh President Kassym-Jomart Tokayev, Egyptian President Abdel Fattah Al-Sisi, Serbian President Aleksandar Vučić, Argentine President Alberto Fernández, Ecuadorian President Guillermo Lasso, IOC President Thomas Bach and UN Secretary-General António Guterres will attend the opening ceremony and join us in the grand event.

In organizing Beijing 2022, China follows a green, inclusive, open and clean approach, which contains the values that China has always advocated.

Openness promotes further exchanges and cooperation between the East and the West. It is the concrete embodiment of the vision to build a community with a shared future for mankind put forward by President Xi Jinping. Beijing Winter Olympics actively consulted experienced international organizations and expert teams in terms of venue construction, ice and snow making, competition organization, training and competition, etc., and drew from international advanced experience. At the same time, Beijing Winter Olympics will vigorously promote winter sports on a global scale with its influence, and share the successful experience with the world.

Cleanness avoids extravagance and waste, and maximizes resource utilization. The construction of venues for the Beijing Winter Olympic Games will be carried out on the original basis of the 2008 Olympic Games. For example, the "Water Cube" (National Aquatics center) that once shocked the world will be transformed into "Ice Cube" ; Big Air Shougang, which hosts the Snowboarding platform event, is transformed from an abandoned factory; Wukesong Sports Center can be converted from basketball court to skating rink within 6 hours. In addition, the Organizing Committee also supervises the possible integrity risks according to law and regulations to ensure the effective use of funds.

Now, the world is looking forward to Beijing, and an unforgettable event is about to begin. We can foresee that after the 2008 Beijing Olympic Games, the 2022 Beijing Olympic Winter Games will once again write a brilliant page in the history of human sports. The value and experience it brings will also become the permanent wealth of mankind. I'd like to invite all of you to pay attention to the Beijing Winter Olympics with us (for more information please check out the official website https://www.beijing2022.cn/en/ ). I believe that the people of Dominica will see a different China in the Winter Olympics, and our understanding and friendship will be further enhanced.