What tourism means to you 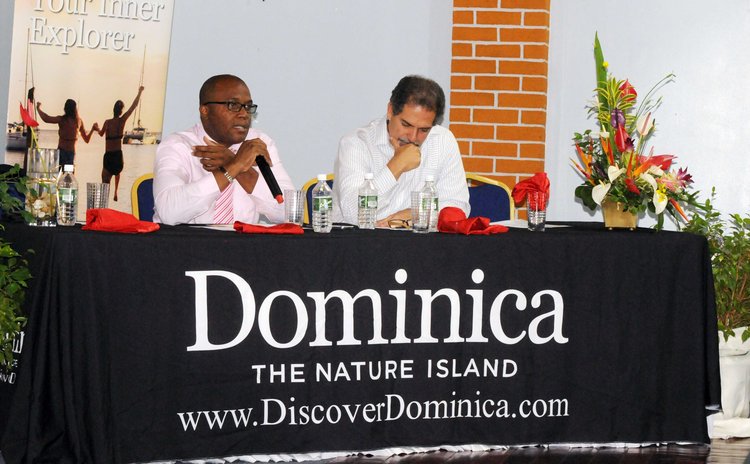 Tourism may be everybody's business but everyone in the business of tourism would probably say they're dreaming of more business from tourism.

That's a plausible answer tourism officials of the Discover Dominica Authority (DDA) would get if Dominicans were to respond to the statement: "What Tourism Means to Me"- the tagline for Tourism Month 2015.

Last Friday the DDA officially opened Tourism Month at the Fort Young Hotel in Roseau before about eight members of the press and a dozen DDA staff dressed in brilliant orange T-shirts.

"We do not think of tourism as an industry," said Gregor Nassief, the president of the Dominica Hotel and Tourism Association. "We think of it as a way of life; it is an industry which impacts everyone."

Nassief said that the sector welcomed about 381,000 visitors (probably Mr. Nassief's figure included cruise visitors) to Dominica's shores in 2014 and that most Dominicans would have some level of interaction with at least one visitor.

Yes, true Gregor; but life is not like that, really- inequality is the name of the game in all sectors. And tourism in Dominica has miles to go before it sleeps.

In Athie Martin's eyes, this would be risible if it weren't so sad. These numbers, coupled with his experience and observations, have left him fearful for the future of the tourism sector.

"I'm afraid in 2014, honestly, we are so far behind. People don't get it and unless we agree that we have a major reorganization of the mind; I'm afraid I do not have a very hopeful view of the tourism sector now unless there is some very (significant) shift in attitude, in the policy, in programming; I'm afraid that is not a pretty picture."

Nevertheless, Nassief said at the opening of Tourism Month last week that the industry earned $190 million in foreign exchange.

"So it is a very, very key industry," he said. "I think that the message that we want to get across is if we build the industry in a sustainable way and if we develop tourism as a way of life we are in fact building the country."

During the ceremony Colin Piper, the Director of Tourism presented the 2015 Director's Award to Castle Comfort Lodge and Dive Centre.

Minister of Tourism Robert Tonge presented the Minister's award to "Heart of Dominica", a community group that packages and promotes authentic experiences in the "heart" or interior of Dominica.

Activities for Tourism Month 2015 focuses on the youth to ensure, according to Minister Tonge "that we spread the message among the youth so that they understand how tourism affects them directly and indirectly."

Activities targeting the youth directly are a tourism youth congress at the Arawak House of Culture on Wednesday and presentations to schools island-wide on 14 May.