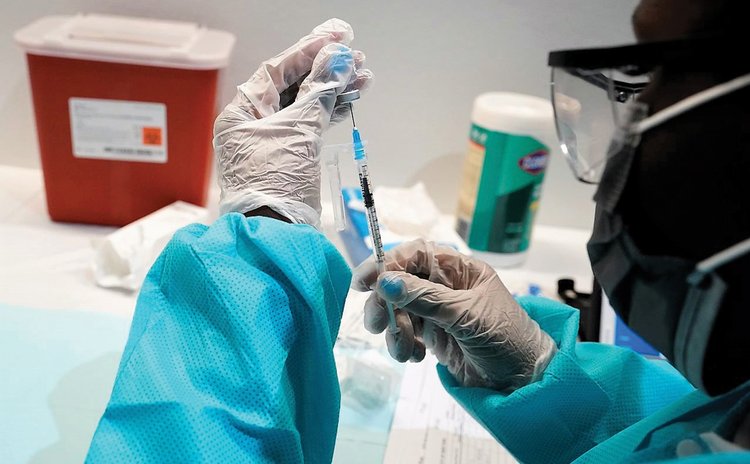 Frontline workers have been cheered as heroes during the COVID-19 crisis and some have found the challenge and teamwork deeply meaningful. But the work also has been exhausting and traumatic even for people accustomed to a life-and-death job.

As the virus continues to rage here in Dominica, those on the frontline say they are overwhelmed with the heavy task of providing care to those who are infected and with their safety.

Among the many valid reasons for concern in this pandemic is fear of developing an infection, fear of failing to provide adequate care for patients given limited resources, fear of carrying the virus home and infecting family and friends, fear of stigmatization, and many others, says Nurse Christopher, one of the healthcare worker directly involved in the fight.

Last week, the Chief Executive Officer (CEO) of the Dominica China Friendship Hospital (DCFH), Dr. Dexter James, told the nation that staff members at the country's main health care facility have been exposed to the virus.

"Many of the nurses who speak to me daily say that they can't handle it, because believe me, it is hard waking up every day to provide care to someone else and knowing that you might be putting yourself and your family at home at risk," Nurse Christopher said to the Sun.

The medic is also of the view that not enough is being done to protect the lives of those risking theirs.

Another one of the medical officers with the responsibility for testing residents lamented the relaxed approach taken by the authorities within the past few months, which she believes contributed greatly to this second wave.

"The infection control restrictions became too laid back, both from residents and mainly from the authorities' end, and as someone who reads and sees daily what my colleagues in the region and internationally are going through, this is what many of us have been trying to avoid, but sadly we're now at this point," she said.

While Dominica is among the lucky countries which have reported no deaths due to COVID-19, few of the health care workers who we spoke with expressed concerns that if the situation gets worse, the country isn't prepared to handle this situation, as we have limited ventilators on the island.

Staffing is a huge issue, the Sun has also been told. With many of the qualified nurses leaving the island in search of better wages, health care workers we spoke with say they fear that the cases will greatly outnumber the required number of frontline workers in Dominica- that number of patients-to-health-care-worker may have been exceeded already.

Similar concerns have also been echoed by other frontline workers- firefighters whose role includes transporting positive patients from their homes to the isolation unit in Portsmouth.

According to one of the officers who spoke to the Sun, more than a quarter of his colleagues have tested positive for the virus and the fear is growing that soon they'll run out of manpower.

Hence, a letter has since been written to their parent Ministry-The Ministry of National Security- requesting that with immediate effect all individuals who have sent in applications to the Dominica Fire and Ambulance Service should be recruited without training to increase the manpower.

Prime Minister Roosevelt Skerrit during a recent interview announced that nurses and other frontline workers will be given a stimulus package once the situation is under control.

"The people in the frontline, the nurse, the ward aids, the people who are taking care of patients who have volunteered and have decided to leave their children, their husbands, their wives at home, the district medical doctors and the district medical team... the ones who come in at 8 am and leave at 9 pm and ensure that everyone gets tested, that's a wonderful thing and this country is blessed to have these conscientious people," he said.

He encouraged the general public to show support to these frontline workers by heeding the call from the Ministry of Health.

"The least we can do is to reciprocate by staying home, going out to get tested and taking the vaccine. So all of us who want a stimulus for them go and get vaccinated, that's the stimulus we should give them. Go get tested and leave the rest for Skerrit to deal with. Presently we are taking care of the situation now and after the battle, they will be recognized," Skerrit stated.