Yesterday, 6 January, was the anniversary of the death of Prime Minister Pierre Charles. We remember him by re-publishing our 12 January 2004 front page story 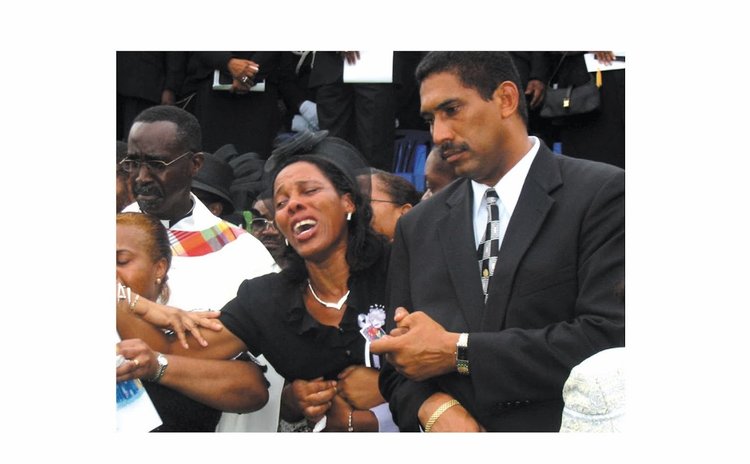 Mrs Charles at the funeral of Pierre Charles

After attending what would eventually be his last Cabinet meeting, Prime Minister Pierre Charles died Tuesday of a massive heart attack. He was 49. His death shocked a nation which lost another Prime Minister, Rosie Douglas, in similar circumstances on October 1, 2000.

Radio journalist Daryl Titre told The Sun that he suspected something was not right when he saw the Prime Minister's car zip towards the Princess Margaret Hospital as he stood near the Roseau West Bridge.

He too rushed to the PMH where he saw Charles' lifeless body being taken out of his car.

Titre said he was later told by a Government official that the Prime Minister complained of chest pains just after the ended a Cabinet meeting in the late afternoon. Since the elevator at the newly constructed Financial Centre, where the PM's office is situated, was not functioning, the Prime Minister walked down six floors. His security detail found him slumped on the back seat of his car when they arrived at his home at Morne Bruce. He was then rushed to the hospital.

In a written statement Hospital Medical Director, Dr. Irving Pascal said Charles was taken to the Princess Margaret Hospital Accident and Emergency Department "at 6:55 p.m. on Tuesday, 06 January, 2004 having collapsed in his vehicle while on the way home from work.

"Immediately upon arrival cardiopulmonary resuscitation was initiated by a team of medical specialists and nurses led by the Consultant. Anesthetists continued intensive efforts to save him until he was pronounced dead at 7:55," the Medical Doctor stated. In recent weeks concern over the health of the late Prime Minister had influenced politicians even within the Dominica Labour Party to call for Charles to step down.

In December 2003 Charles was forced to take a three-weeks leave of absence from his post on the advice of his doctors.

In mid-February 2003 the Prime Minister underwent coronary angioplasty at the Eric Williams Science Complex in Trinidad and Tobago. He was admitted to the hospital complaining of chest pains. At that time the Prime Minister was attending a meeting of CARICOM Heads of Government in the twin-island state.

Again, in late July, PM Charles went to Trinidad for follow-up medical examination. His frequent illness, which began in 2002 when he was rushed to a hospital in Martinique, prompted officials of the DLP to tell The Sun that they were concerned about his ability to continue his duties.

As The Sun reported in December 2003 CARICOM colleagues were quietly suggested that he should step down following medical attention at an Atlanta hospital.

But Charles said, just before he died last week, that he was in for a long haul and that his health was not a problem.