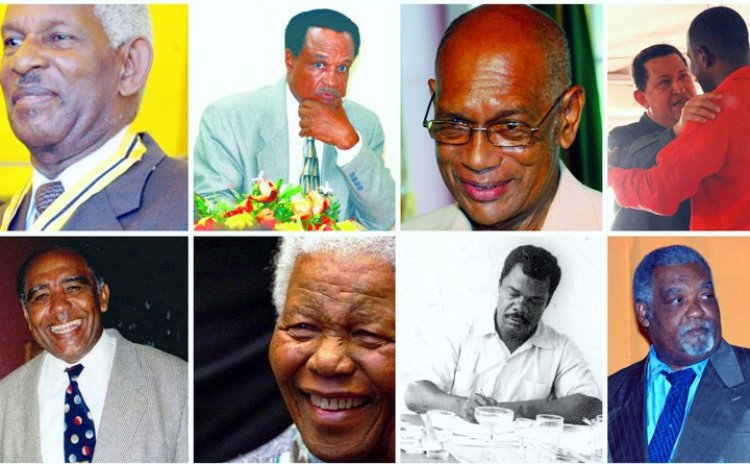 Vernon Lorden Shaw, born May 13, 1930 was the fifth President of Dominica. He died in December 2013.He is an alumnus of the Dominica Grammar School and Trinity College, Oxford. He was a career civil servant, rising to the post of Cabinet Secretary in 1977, and retiring in 1990. He was elected to a five-year term by the House of Assembly on October 2, 1998, as the candidate of the United Workers' Party (UWP). The secret ballot, party-line vote was 18-13. He took office on October 6, 1998, following the expiration of President Crispin Sorhaindo's single five-year term. Shaw left office on October 1, 2003, and was succeeded by Nicholas Liverpool.

Business and family man and devout Catholic, Carlton A. Phillip of Fond Canie was buried in the Catholic Cemetery in Roseau on Tuesday July 30, 2013 following the funeral mass at the Cathedral Chapel.

Phillip, 78, died at the Princess Margaret Hospital on Thursday July 18 after ailing for a while, one of his daughters, Caryl Williams, told The SUN.

Carlton Phillip was born in Roseau on February 15, 1935. Phillip started his rent-a-car service with three Volkswagen cars, and a roadside mechanic shop on Field's Lane, which was later moved to Fond Cole in the early seventies.

At Fond Cole he expanded the business to include the retailing of motor vehicles, being the agent for Subaru and later Honda. He also sells Toyota and used cars.

Family and friends were in shock at the sudden death of their beloved Donovan 'Donny' Robinson at the Princess Margaret Hospital on Thursday March 14, 2013. Dr. Robinson, a trained agriculturist, obtained his first degree in Trinidad during the period of the transition from the Imperial College to the University of the West Indies (UWI). He would be one of the first graduates coming out of the UWI in 1964. He pursued post graduate work in agriculture in the United States and graduated with a PhD and worked in the US for many years. On his retirement, he returned to Dominica around 1990, when he took up the appointment of Director of Agriculture from 1990-1996. Afterwards he worked with the Food and Agriculture Organisation (FAO).

The mortal remains of Edward Alexander, 76, of Colihaut, was laid to rest on Friday June 7, 2013 following Catholic funeral rites at the Colihaut Catholic Church.

The former clergyman, communicator, politician and diplomat died in St Lucia on Tuesday morning May 28, 2013 where he had gone to seek medical treatment.

Edward Alexander was ordained to the Catholic priesthood in 1996. He married educator Patsy Monelle of San Sauveur in Canada. Around that period he left the priesthood.

He was unsuccessful as a contestant at the 1995 general elections on a United Workers Party (UWP) ticket for the Colihaut constituency. The UWP however won that election and Alexander was appointed advisor to then Prime Minister Edison James.

Former broadcaster and United Workers Party politician, Ferdinand Frampton died at the Princess Margaret Hospital on Thursday afternoon. He was 64.

Frampton was born on 4th October, 1949; he attended the Dominica Grammar School. In addition to his extensive period as a broadcaster, Frampton worked as a teacher, salesman, manager, Justice of the Peace, community worker and village councilor.

As a broadcaster, Frampton was manager and sales manager of the Dominica Broadcasting Corporation (DBS radio), programme director and assistant manager of the Voice of Life Radio, and assistant manager and programme director of Q95 FM. Frampton also served as chairman of the Pointe Michel Village Council and the Chairman of the South Western Village Council. In the credit union movement, he served on the boards of the Dominica Credit Union League and the La Salette Credit Union in Pointe Michel.

On retiring from the public service in the 1980's, Linton would end up in the Dominica House of Assembly as senator during the administration of late Prime Minister Dame Eugenia Charles (1890-1985). Linton was a foundation member and first president of the Marigot Cooperative Credit Union. He served on the Banana Growers Association as chairman of the board of directors. He served on the Public Service Commission, Electoral & Boundaries Commission and Education Board. He was an Education Officer as well. The country recognized his public service by awarding him the Commonwealth of Dominica's second highest award, The Sisserou Award of Honour in 1999.

Frederick Osborne George Symes also known as Ossie and affectionately as Sam Bass will be laid to rest at the Roseau Catholic cemetery on Monday March 25, 2013 following a Eucharistic celebration at the St Gerard's Hall Cathedral Chapel.

The 75-year old Ossie Symes died of heart failure, according to one of his brothers, at the Princess Margaret Hospital during the evening of Tuesday March 12 after ailing for some time.

After completing his Cambridge examinations, Ossie began his working career at the DGS as a teacher. His working experience took him to the Audit Department from where he went over to England to study Public Administration. He excelled at his studies and was re-assigned to the Treasury Department and eventually became Accountant General. He returned to Audit as Director. He moved on to become Chief Personnel Officer from where he would have the opportunity to act as Cabinet Secretary on occasion. He retired from the public service in 1993. Two years later he would be approached by the United Workers Party to be Speaker of the Dominica House of Assembly (1995-2000). Ossie Symes was one of the people who changed the Civil Service Association, the union representing public officers.

This outspoken and strongly passionate Dominican died at his home in Goodwill aged 93 on Monday March 25 about 7:30am after spending just over a week at the Princess Margaret Hospital.

Stafford Lestrade lived life to the full. He was one of the pioneering members of Credit Union movement in Dominica and a founding member of the Roseau Cooperative Credit Union. He was the mayor of Roseau for six years around the 1960s. He founded his own political party called Peasants and Workers Movement, and was later identified with the Dominica Freedom Party until he fell out with leader of the Freedom Party Dame Eugenia Charles.

"He was Dominican in many respects," a grief stricken, emotional and teary Prime Minister Roosevelt Skerrit cried, moments after it was announced that Hugo Chavez, the flamboyant Venezuelan leader, irritatingly bumptious to many in the developed world, but equally idolized by the poor in his homeland, had died of cancer on 5th March 2013.

And, in a sense, his homeland extended way beyond the boundaries of the South American mainland, his giving, paternal hands, unfolding and unfurling as it touched the seat of power here.

"I have lost a colleague, a father, a brother and a friend," Skerrit continued, a hollow and heartbreaking sadness in his voice. "Hugo Chavez held my hand in the brightest and darkest hours of my tenure to date as your Prime Minister."