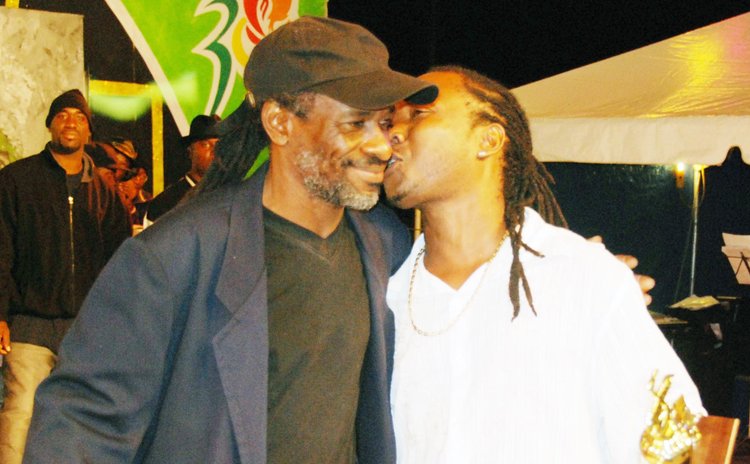 Dice, right, and Pat Aaron at the end of a Calypso Finals

Long-time songwriter for Dominica's most successful calypsonian 'Dice' , Pat has also written for many other successful artistes.

Pat, who has been penning songs for over 50 years, sees himself as someone whose mission in life is to oppose wrongdoing. And after all this time, he does not intend to change.

He considers Calypso as a powerful tool for nation building, and says he has written songs against wrongdoing under every government in power during his long career.

Pat believes that the social commentary of the Calypso art form must serve as a deterrent against wrongdoing by "people in high places". Poignant messages in calypso lyrics reach people across all boundaries, he contends, adding that the only people who don't like Calypso music are those who do wrong things, he adds wryly.

Pat's lyrics are poetic, penetrating and often steeped in scathing social commentary. For decades his songs have made wrongdoers squirm.

It goes without saying that Pat loves what he does.

"I do that every day of my life. Writing songs is — sometimes I think — my drug. It's something I can't even take a rest from if I want to. It comes to me naturally," he says.

Pat has formed a winning partnership with the 'Dice'.

"There are other good artistes… but Dice has something natural….he is an actor, he is a singer; he is a performer. And he understands the songs, I think, better than everybody else.

"He knows how to digest it and bring it out. It is something that is inexplicable in words. We have a kind of father-son relationship too….and we have that very strong bond."

He writes other types of music, but Pat considers calypso his niche. Besides, it keeps him busy enough because he writes for other regional artistes.

Some calypsonians are criticized for not writing their own songs, but Pat explained that most calypsonians he has known have songwriters.

Despite his song-writing talent, Pat says he has had his share of haters who claim that he exploits calypsonians.

"To get a recording done, it's gonna cost you over $1,000. And you see all of them getting recordings and they don't have the money. So you have to know who is fronting it.

"I put more into calypso than I receive and I like it so because I am a giver. And I believe it's better to give than to receive…" he maintains.

But only a few of those he has helped have come to his defense.

"Many people cannot stand for the truth if they are facing opposition; they wilt under pressure. But there are a few of them who have a level of loyalty and who have a head of their own."

Commenting on how Calypso has evolved over the years, Pat says, people from all walks of life embrace calypso.

Further, he thinks the music, arrangement and lyrics have improved and the topics are more varied today.

Today's calypsos are more complex than the two and three-line verses of yesteryear, he notes, but there is still room for further improvement.

Speaking about local Calypso competitions, he thinks it is absurd for judges to assess as many as 60 calypsonians in one night, which is happening now in the elimination rounds.

In fact, he considers it an impediment to the development of Calypso.

"As a result… some of the best songs will stay down— especially if they are done by new and unknown artistes — because when you have to pick 10 or 12 out of 60, those who already have a name have an advantage…"

"These artistes are singing with a three-piece band, which doesn't bring out your arrangement. And you have to sing two verses and two choruses, which do not bring out the fullness of your song," he contends.

He suggests that the elimination rounds should be divided into sessions with just 30 calypsonians each night.

This meant that there was room for more artistes to perform and expose their talents, he recalls.

"Therefore we had had more spaces for new calypsonians coming from 'elimination' for quarters… to get an opportunity to expose their talents. It worked well and I don't know why it has changed."

Aaron would like to see Calypso included as part of the school curriculum to help children develop a stronger affinity to the art form.