Wildfire in west Canada continues to grow out of control 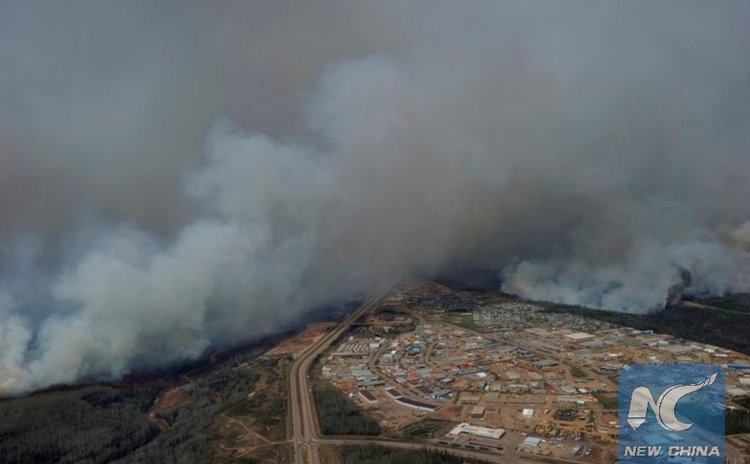 TORONTO, May 6 (Xinhua) -- The wildfire raging in western Canada that has forced a massive evacuation in Fort McMurray has grown to 101,000 hectares overnight and is moving away from Fort McMurray, officials said Friday.

The wildfire near the oil sands hub of Fort McMurray has forced the evacuation of 88,000 residents, destroyed 1,600 structures and disrupted energy production.

Some 25,000 people previously sheltering in oil sands work camps north of the city now have to evacuate once again to the south, escorted by police through their fire-ravaged community.

"The city of Fort McMurray is not safe to return to and this will be true for a significant period of time," said Alberta Premier Rachel Notley.

Notley said about 7,000 of those people were evacuated Thursday on flights that took off from oil company runways near two of the camps. The province hopes to fly another 5,500 people out Friday.

Police say that if weather, fire and road conditions remain favorable, all of the estimated 1,500 vehicles will be moved through and out of the city Friday. The first convoy carrying evacuees started moving toward Fort McMurray on Friday morning and officials say the convoy evacuation is expected to take four days to complete.

They will be the first residents to see the devastation left by a terrifying wildfire that tore into town Tuesday, raining embers and consuming neighborhoods and, at times, seeming to threaten the entire city.

Royal Canadian Mounted Police (RCMP) cruisers will escort groups of 50 vehicles at a time. Helicopters will watch from overhead. All intersections along the route will be controlled and blocked by police, to ensure no vehicles try to slip away from the convoy.

To watchers it may look, perhaps fittingly, like a funeral procession. They'll roll south, with the hills around Abasand to the right and the downtown core to the left.

"We've all seen the heartbreaking images taken by citizens travelling through Fort McMurray today," Notley said. "And there is no doubt the damage is extensive and will take many months to repair."

Climbing the hill out of the river valley, they'll pass Beacon Hill, where hundreds of homes were lost. Atop the hill they will pass the ruined hulk of the Super 8 Motel, a Shell station that exploded in a fireball, and a trailer park that burned to ashes.

South past the airport, at some point they'll clear the fire zone, and the convoy will be released by police. From there, many people will make their way to Edmonton or Calgary, to be housed in evacuation centers or with family or friends.

Canadian Prime Minister Justin Trudeau said 7,000 cots have been supplied to evacuees and another 13,000 are on way. Trudeau said he will visit Fort McMurray in the next few weeks.

Canadian Red Cross said people from across the country have come together to show their support and compassion for Fort McMurray, donating 30 million Canadian dollars (about 23 million U.S. dollars) for the relief effort.

Many people including the Chinese community in Toronto told Xinhua they texted Red Cross to donate. Both the federal and Alberta governments have promised to match all donations to the Red Cross for the relief efforts in Fort McMurray.

As the wildfire savaging away from Fort McMurray, economists trying to gauge the impact of wildfire and its disruption of oil sands production are already cutting their outlooks for the Canadian economy.

"The situation remains fluid, and uncertainty remains about how long production disruptions will persist," economists at Royal Bank of Canada said in an economic comment released Friday. "However, if we assume those shutdowns last for two weeks, they would subtract 0.5 percent from May GDP."

Meanwhile, in the wake of Friday's national employment report, economists at BMO Financial cut their own second-quarter GDP estimate to zero from 1.5 percent amid the fallout from the Fort McMurray wildfires.