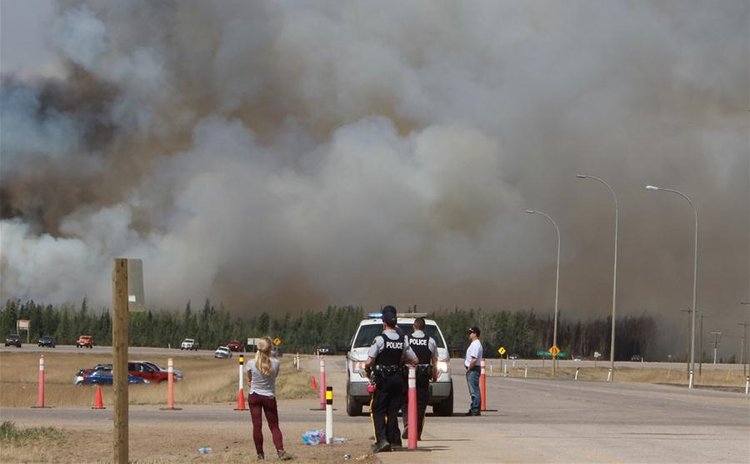 TORONTO, May 8 (Xinhua) -- The huge wildfire in western Canada that has forced a massive evacuation in Fort McMurray on Sunday appeared to have slow down its advance after burning more than 1,610 square kilometers, said Alberta Premier Rachel Notley.

The wildfire, which broke out a week ago, grew "much more slowly" than predicted, said the official, who disclosed the wildfire continued to spread east across the unpopulated forests, pushing toward the neighboring province of Saskatchewan.

Some 25,000 evacuees have all left oil sands work camps in north of the city. Police will continue to escort vehicles through Fort McMurray as needed, said Notley.

While the threat to Saskatchewan communities is not imminent, the biggest concern is the smoke, according to fire control officials.

Wind gusts of 40 km/per hour to 70 km per hour were predicted in the region Sunday, which could only help fuel the flames, and there would be light rains as part of a cold front that's moving into northern Alberta, offering little relief to those battling the fire.

The wildfire outside of Fort McMurray, once measured in football fields and described as "the beast" by firefighters, could take months to douse, said Matthew Anderson, the wildfire information officer with Alberta Agriculture.

Fire fighting officials say it's not uncommon for a fire of this size to burn for months. "We would need a significant amount of precipitation to really help to bring things under control a bit more."

The province's meteorology branch also predicted a chance of a small amount of snow Tuesday or Wednesday because of the approaching cold air mass.

Altogether 43 fires are burning across Alberta's forests, seven of them still out of control, including the wildfire dubbed as the "beast."

More than 500 firefighters, alongside 15 helicopters and 14 air tankers, are battling the blazes. Over the past seven days the wildfire has destroyed more than 1,600 homes and buildings and forced 88,000 people to flee from their homes.

There is no timeline for evacuees to be allowed back into their homes, but the Alberta government has begun preliminary planning, though it stressed fighting the wildfire is still the first priority.

Both Suncor and Syncrude, the two Canadian oil companies with oil sands work sites in north of Fort McMurray, have evacuated their facilities as a precautionary measure.