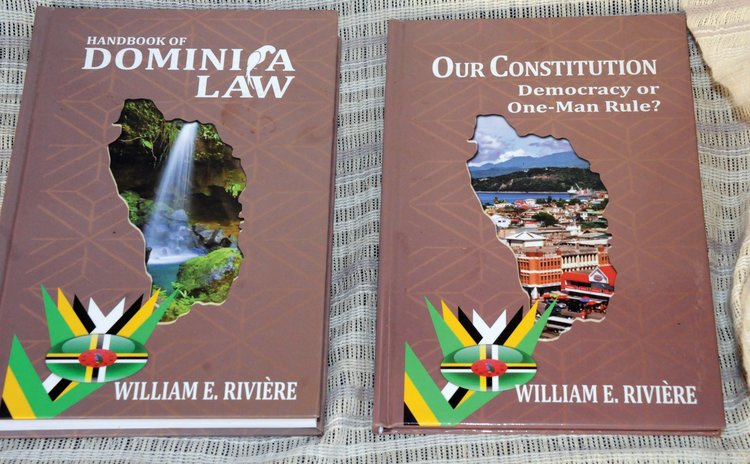 Historian and Attorney-at-law Dr. William "Para" Riviere has published two books on Dominica law and constitution in language that the average "non-legal" man-in-the street can read and understand.

The books: "Handbook of Dominica Law" and "Our Constitution: Democracy or One-man Rule" was published in 2017 by Arawak Publications of Kingston, Jamaica.

"Handbook of Dominica Law is not a textbook on the laws of the island," Dr. Riviere writes in the introductory notes to the 352-page hard-cover book. "Nor is it intended to convert readers into instant lawyers."

Rather, Dr. Riviere adds, the book takes into account "the population's abysmally low level of familiarity with things legal," and its only purpose is to "raise the standard of understanding of the laws that govern their lives".

"It is a mere beginning," he wrote.

In the preface of the "Handbook of Dominica Law" Dr. Riviere said he hopes he has filled the vacuum, somewhat, of the knowledge of the law in Dominica and elsewhere and has somehow responded positively to the adage "ignorance of the law is no excuse."

"Such ignorance is rooted in the elitist character of the legal profession which has been inherited virtually wholesale from the Colonial Power," Dr. Riviere said. "In the present neither civil society nor the State has regarded as desirable that the client community be educated on the law. As to the State such education, like conscientising education on the whole, would pose a threat to the political status quo which thrives on the ignorance of the electorate. Thus, no programme of mass legal education has historically and in the recent past been put into effect."

Hence the book "represents a small, long-overdue attempt to reduce the level of ignorance of the law", the author states.

The content of "Handbook of Dominica Law" first appeared as a series of articles captioned "Law Notes" published in the now defunct Independent Newspaper from 1999 to 2000 and in the Sun Newspaper from 2012 to 2014.

In non-legal language, the "Handbook" covers the Court System; Criminal Law; Law of Contract; Law of Property; Law of Succession; Family Law; Company Law; Law of Torts; The Constitution; Kalinago Law; and in Some Issues, Dr. Riviere dissects and explains recent issues in the news such as "Appointment of a President", "Dual Citizenship" and "Integrity Law".

The discussion on the latter may have to be updated since Dr. Riviere wrote on the Integrity Commission long before the Government significantly modified the qualifications of the Chairman and the number of commissioners.

The second book, "Our Constitution: Democracy or One-man Rule" is much smaller, just 84 pages enclosed within hard covers; it is a treasure trove of information and commentaries on the "significant historical politico- constitutional events which predated the promulgation of the country's Independence Constitution", Dr. Riviere writes in the introduction to the book.

"It investigates the extent to which the critical principle of democratic practice, namely, governance of the country by a majority of its people, is enshrined in the Independence Constitution of the Commonwealth of Dominica," Dr. Riviere writes. "Against the background of the fundamental rights and freedoms guaranteed to the citizenry, the powers invested in the leading institutions of governance are examined."

The books, "Our Constitution: Democracy or One-man Rule" and the "Handbook of Dominica Law" are must-reads for aspiring lawyers, students of tertiary institutions, such as the Dominica State College, and the ubiquitous man-in-the-street.

The books will be available soon on Amazon.com.