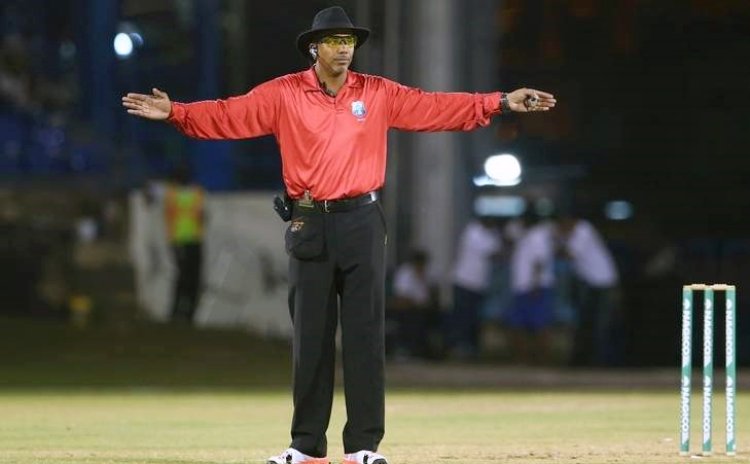 ST. JOHN'S, Antigua – Joel Wilson will become the 480th Test umpire in history, after being appointed to stand in the first Test between Bangladesh and South Africa next month.

The 48-year-old Wilson from Siparia on the south-western coast of Trinidad will become the first West Indian umpire to make his Test debut in 15 years, when he takes the field on July 21 in the Bangladesh city of Chittagong and will be the 51st from the Caribbean to officiate the game at this level.

Wilson will be joined in the middle by Richard Kettleborough of England for his first Test, with fellow umpire Paul Reiffel, the former Australia fast bowler, and match referee Chris Broad, the former England opener, completing the team of match officials.

"When I started umpiring 20 years ago, this was obviously, one of my goals and to see it come true is really amazing," said Wilson, who was part of the umpiring pool for this year's ICC Cricket World Cup in Australia and New Zealand.

"Over the last 12 to 18 months, the ICC has put a system in place, where there is an umpires' coach, a number of mentors and access to elite umpires, and a group of us in the Caribbean have been utilising these facilities and it has benefitted us, as it has helped us to prepare better for matches."

He added: "One of the best things happening in West Indies cricket right now is our umpiring. . .Umpiring was put under a particular structure under the previous WICB Director of Cricket Tony Howard about five years ago that allowed us to see a pathway to the top.

"Since that structure was put in place, we have had a few umpires being recognised and attending international events, and our umpiring has turned the corner and a number of us are now knocking on the door for international appointments."

"Joel has worked very hard to create this opportunity for himself and we're delighted that he has been given the chance to show what he has developed over the last six years," said Lewis.

"There's nothing more rewarding for players – or match officials for that matter – than being given the opportunity to perform at the highest level in any sport and we are confident that Joel will make the most of this opportunity.

"Joel's appointment to appear in a Test is also an incentive for the current umpires on the regional panel and others to follow that there are opportunities for them to advance in this profession with commitment to the role and consistency in their field work."

Wilson has already stood in 21 One-day and 16 Twenty20 Internationals in the Caribbean and abroad over the last four years, but he revealed there were many times throughout his career that his resolve came into question and he considered quitting.

"I would advise my colleagues to keep working hard and prepare diligently for whatever level of umpiring they are called upon to do, and most of all be 'coachable', be open to people giving them advice and understand it is a process," he said.

"There were many times I had considered giving it up, but there were several people that gave good advice and encouraged me to continue. They felt I was much better than I had been given credit and could make an impact on the game, so my advice for my colleagues would be to continue working hard and never give in because their chance too, will come."

Following the annual conference of the ICC, the sport's World governing body last month in Barbados, its chief executive officer Dave Richardson indicated that a number of umpires from around the World – including Wilson – had been identified and placed on its Emerging Panel.

"The ICC Board also noted the emergence of a new generation of umpires from a wider range of countries, including an umpire from West Indies who has done very well," he said.

"He is now in what we call our A-Team, our Emerging Panel, so he will be appointed to matches outside of the Caribbean to gain experience of different conditions and he will take the step up into the Elite Panel if he does well."

The Elite Panel of ICC Umpires comprises the top umpires in the World. To ensure the highest possible standards and guarantee impartial adjudication, two umpires from the Elite Panel stand in almost all Test matches around the World, while one member stands with a home umpire from the International Panel of ICC Umpires for One-Day International matches.