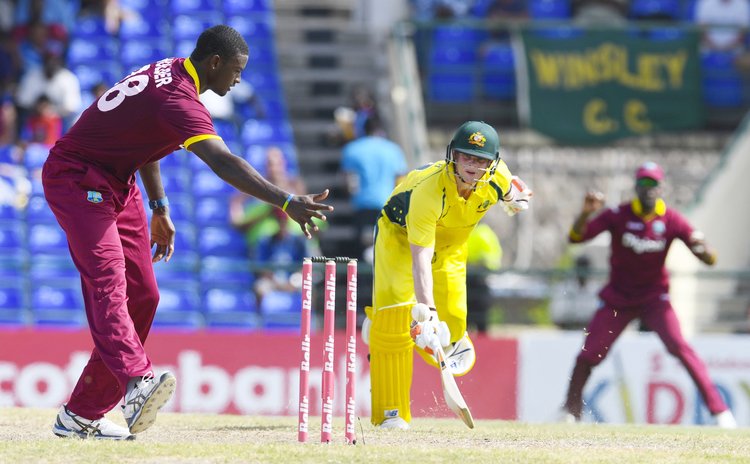 West Indies vs Australia: Smith safe after run out attempt

Marlon Samuels won the Man-of-the-Match award for his brilliant 92 off 87 balls as the home side reached 266-6 off 45.4 overs – to win by four wickets on Monday night at Warner Park.

Set 266 for victory at Warner Park, West Indies hardly put a foot wrong as they chased down the target to get home in the 46th over, with Man-of-the-Match Samuels stroking 92 from 87 deliveries.

Opener Johnson Charles chipped in with 48 from 38 balls, left-hander Darren Bravo carved out 39 while Denesh Ramdin struck 29 and opener Andre Fletcher, a run-a-ball 27.

Leg-spinner Adam Zampa was Australia's best bowler with two for 53.

West Indies' victory bid was buttressed by three key partnerships. Charles and Fletcher put on a scorching 74 for the first wicket before Samuels and Bravo added a further 82 for the third wicket.

Samuels then anchored a crucial 73-run fourth wicket stand with Ramdin which put the regional side with in touching distance of their target.

Well perched on 240 for four in the 41st over, West Indies lost three quick wickets for 14 runs in the space of 18 deliveries, as an air of nervousness crept into the camp.

Kieron Pollard settled the nerves, however, smashing a four and a six in scoring 16 not out off 12 deliveries, as West Indies won their second game of the tournament to move into second spot on eight points.

Sent in earlier, Australia were powered by opener Usman Khawaja's top score of 98, as they reached 265 for seven off their 50 overs.

Captain Steve Smith struck 74 while George Bailey got 55, but the remainder of the batting struggled to come to terms with the Windies attack.

West Indies' decision to bowl first was vindicated when Aaron Finch nicked the fourth ball of the afternoon from Holder to Sulieman Benn at slip, with a single run on the board.

Khawaja and Smith then spearheaded the Aussies' fightback, putting on 170 for the second wicket to lay the base for a massive score.

Smith had become unsettled when he top-edged a slog sweep at Brathwaite and was caught and bowled in the 35th over and Khawaja spent a nervous half-hour in the 90s before he was run out attempting a third run with Bailey in the 41st over.

Despite Bailey's 56-ball knock with one four and two sixes, the much anticipated late acceleration never came as West Indies limited Australia to just 73 runs off the last ten overs while picking up four wickets.

Charles and Fletcher then stunned the Aussies with a whirlwind opening stand that required a mere 59 balls, and which set the tone for the innings.

They fell 11 runs and 23 balls apart – Fletcher stabbing Faulkner to Bailey at point in the 10th over and Charles lbw playing back to Zampa in the 14th.

Samuels, with 11 runs from his two innings in Guyana, then emerged from a slow start to dominate the Aussie bowling, counting eight fours and four sixes.

His first 11 runs required 24 deliveries without a boundary but his first big scoring shot saw him clear the ropes at long on with seamer Mitchell Marsh in the 22nd over.

He then batting fluently to reach his 28th ODI half-century off 57 deliveries, reaching the landmark by neatly steering Faulkner to the third-man boundary for his sixth four.

He lost Bravo to a soft dismissal, popping a catch on the on-side off Zampa for wicketkeeper Matthew Wade to run around and snare at 167 for three in the 31st over.

Unfazed, Samuels marched towards three figures, moving from 74 to 92 in a dramatic 41st over from Zampa, in which he was also dismissed.

The Jamaican skipped out to the first three deliveries and deposited them over long-off for sixes but then attempted a quick single off the fourth ball and was run out by a long way by Wade's direct throw at the non-striker's end.

Victory should then have been a mere formality then but the usual jitters ensued as Ramdin was bowled by fast bowler Nathan Coulter-Nile in the 44th over and Holder was then given out caught behind two balls later without scoring.

With only 12 runs required from 36 deliveries, Pollard sensibly wrapped up proceedings.