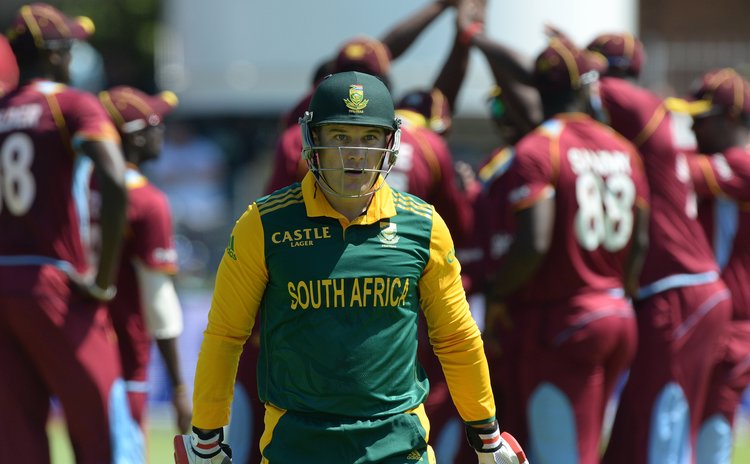 van Wyk is out

PORT ELIZABETH, South Africa – Andre Russell struck a brilliant 64 not out off just 40 balls as the West Indies recorded a sensational one-wicket win over South Africa in the fourth One-Day International at St George's Park, on Sunday.

Russell came in at Number 8 and smashed five fours and five sixes as the West Indies reached 266-9 – to secure the morale-boosting victory with nine balls remaining. He ended the match with a huge hit over long-on.

Marlon Samuels top scored with a stroke-filled 68 to continue his outstanding form at the St George's Park. He made 98 when the two teams played the third ODI here in 2008 and 105 during the second Test match last month.

Samuels and Darren Sammy (51) added a vital 93 for the sixth wicket before Russell's amazing power-hitting at the end.

Earlier in the day, South Africa were sent in and posted 262-8 off 50 overs, thanks to David Miller's maiden ODI century of 130 not out.

Skipper Jason Holder picked up 4-53 – the second four-wicket haul of his career. He was well backed up by left-arm pacer Sheldon Cottrell who took two wickets with the new ball on debut.

The two teams will now travel to Pretoria on Monday ahead of the fifth and final ODI to be played at SuperSport Park on Wednesday afternoon.