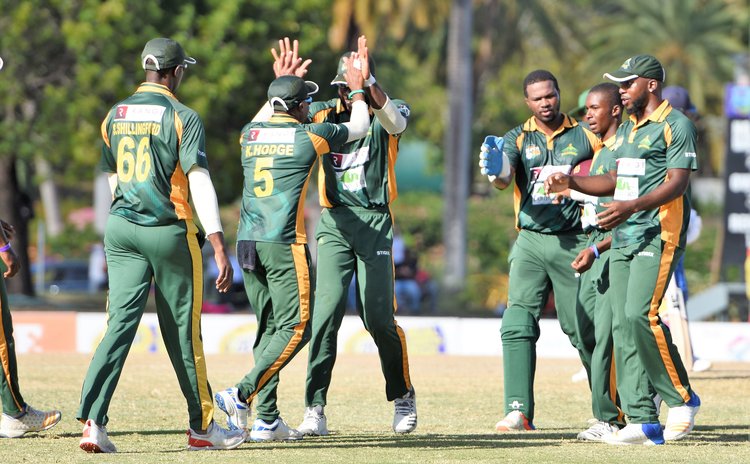 Alick Athanaze is congratulated by teammates after taking his first wicket

Pride Captain Kraigg Brathwaite won the toss and elected to bat first, going on the pattern from the last 5 matches that rain played an important role in the second innings.

Omar Phillips was the first Pride batsman to go, when he was bowled by Ryan John without scoring.

Then the experienced duo of Jonathon Carter and Brathwaite took the scoring to the Windwards. They put away the bad deliveries and kept rotating the strike.

They put on 69 runs together before Brathwaite was stumped by Johnson Charles for 30.

Carter was then joined by another senior batsman in Roston Chase and the pair went about building the Pride innings. Carter being the aggressor of the pair.

Chase chose his shots with accuracy and precision, dissecting the Volcanoes fielders. This pair posted a 68-run partnership before Carter fell for a Pride top-score of 80.

Shamar Springer and Chase then added a quick 36 together before debutant Alick Athanaze provided what was surely the catch of the tournament, flying to his left to dismiss Springer for 22.

Barbados Pride posted 232/9 from their 50 overs. Keon Harding and Tevyn Walcott the not out batsmen. Shane Shillingford, Obid McCoy and Larry Edward had 2 wickets each.

The Windward's run-chase had a solid opening reply, when they got to 44 before Devon Smith fell for 29 off Dominic Drakes.

Jonathon Carter then bowled Johnson Charles for 16 and Kirk Edwards lasted 25 balls for his 10 runs before he was run out.

Then came the partnership that put the Volcanoes innings back on track. Kavem Hodge and Roland Cato took apart the Pride bowlers in the middle overs, despite being interrupted by rain.

This pair blasted 80 runs in a batting display that had the spectators off their seats and waving flags on the grass berms.

Hodge was caught behind off a fine edge for 39. Cato departed soon after for a well-played 54.

Kyle Myers then played a very important had, striking a run a ball 32 to ensure the Volcanoes remained ahead of the Duckworth Lewis par score.

WINDIES U19 batsman and leading run-scorer from the recent ICC U19 World Cup Alick Athanaze showed cricket intuition far beyond his teenage years in a calculated and patient innings of 23 not out.

Athanaze and volcanoes Captain Shane Shillingford batted through a gritty defense by the Barbados Pride who slowed down the match with long fielding planning.

It came down to the Volcanoes needing 3 runs from the last over. And as a fitting end, Athanaze struck the winnings runs.

Windward Islands Volcanoes finished on 236/7 with 3 balls to spare.

Roland Cato was Man of the Match.