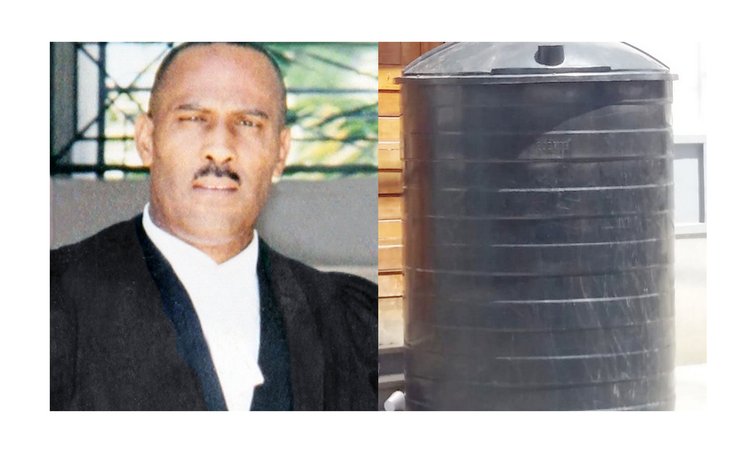 Winston and a sample of the water tank

Reginald Winston, Attorney at Law and former Registrar General has had his life changed most dramatically by a freak accident on Carnival Monday, March 4, 2019.

Speaking with The SUN at his home in Roseau last Thursday, Winston said he had an appointment to see a specialist in Martinique to get a better understanding and evaluation on an MIR which he had done there.

He was on his way home walking south to north on Old Street, Roseau on the sidewalk about 11:30am to noon.

"Next thing I know I was on the ground unconscious. I awakened in the ambulance on my way to the Princess Margaret Hospital," he said.

There he had a CT scan done and stayed in the Accident & Emergency Department until evening during which time he received intravenous fluids. He was discharged about 7:00pm. Dr. Dechausay from the A&E Department recommended that he went to Martinique to do the MIR. He spent three days in Martinique. In subsequent weeks he has not been able to sleep properly at nights because of excruciating pain, sometimes he is unable to move and has had lots of muscular spasms.

The MIR showed herniated (swollen) discs and inflammation of cartilage. He will be going back to Martinique because some of the symptoms now emerging are new.

After the accident, Winston said a young woman met him in Roseau one day and asked how he was doing. He asked her how she knew of his illness.

She told him that she was right behind him walking, and if she had walked a bit faster the 800 to 1,000-pound water tank which fell from the roof of a building would have fallen on her head as well.

Winston, who is also president of the Dominica Red Cross Society, is scheduled to return to Martinique in mid-May for more evaluation.

A retired public officer, Winston was called to the bar in 1996 and during his career did stints in the Attorney General Chambers and in the Director of Public Prosecutions Office before retired as Registrar General at the Registry in 2012.