WOMEN BALLERS CAN JUMP TOO! (Part I) 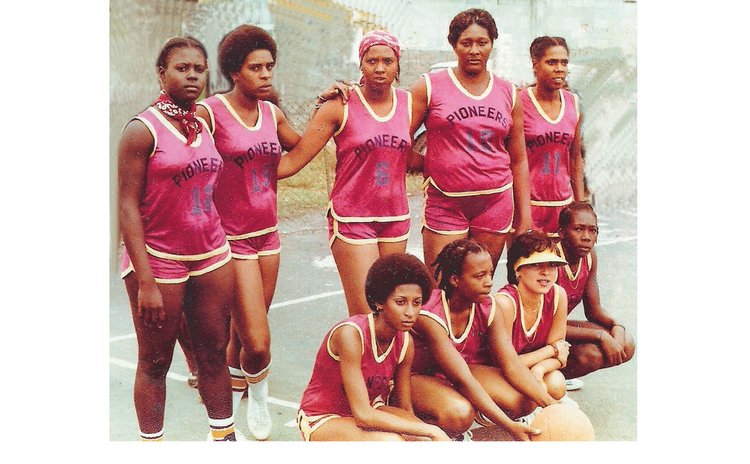 In the year of Our Lord 2021 women's sporting disciplines at the national level in Dominica include netball, rounders, volleyball, track & field, football, cricket, and basketball. But up until the 1970s ladies' sports here were extremely limited, comprising mainly rounders, netball and lawn tennis.

Interestingly though, in 1965, the year before Dominica's basketball league bounced off, as part of the programme for the opening of that year's national netball league a team of Netball Girls engaged and defeated a "Basketball Association" team 27-25. Of course, the latter was a team of men.

So, let's find a comfortable seat and take a look at our women in what, at least on the local scene, was once a predominantly male sport. Enter Dominica's Women's Basketball League, a league which bounced off in either 1981 or 1982.

However, the first team of women to don coloured shorts and numbered basketball jerseys aptly named themselves Pioneers, opening the door to the court for other women. Their story was presented in Jump Ball article No. 16, "PIONEERS: Trail Blazers For Women's Basketball in Dominica" in 2017 and part of Paragraph 6 is reproduced here for information:

It is also important to quote from The Chronicle newspaper of 7th May 1977 (Pg. 12), "In the first match of the evening [4th May], Pepiz Pioneers, the first female team in the history of basketball in Dominica, registered their first victory of the season by defeating the DGS Jets 28-19…"

LEVEL OF PARTICIPATION: In the formative years of the women's league, viz. 1982, '83, '84, annually only 3 teams from Saints, Michelles, Radials, Pros Sisters, and a team from Marigot participated in that competition. However, 1995 was a big year for Women's basketball when a record 7 teams registered and played in that year's League, compared to the 3, 2 or 1 team which had been registering prior. The teams comprising the 1995 Women's Division were: Acers, Celtics, High Flyers, Jazz, Nets, Portsmouth Raiders, and Pros. The home-bases of the teams in the women's league that year were again spread around the island, to include at least Grand Bay, Portsmouth, Marigot and Roseau.

However, between 1996 and 1998 the number of participating teams declined, and three years after the League returned the number had dropped to only 3. The five-year period 2012 to 2016 saw the league being run annually without interruption, with the number of teams fluctuating between 3 and 5.

DETERMINED TO PLAY: Over the almost four decades of women's basketball forming part of Dominica's national basketball league to date, there were instances when an insufficient number of teams registered to have a women's division in those particular years. And so those ladies' teams who were quite determined to play 'ball, were accommodated in DABA's lower men's division.

As noted above, this arrangement began with Pioneers playing in the Juniors Division (equivalent of Division II) against the boys, from their debut in 1977 through the 1980 or 1981 season.

The year 1985 saw the two women's teams, viz. Pros Sisters and Radials individually playing against Hawks, Massacre, Ogan Stars, SMA Gnats and against each other in Division III. Two years later (1987), Pioneers made a 1-season come-back after previously competing in 1983 and had to settle to compete in Division III versus five teams of young men, viz. Hoyas, Reefs, Rookies, Sharpers and Stormers.

Although the ladies were often taken advantage of by their young male opponents, sometimes losing by as many as 84 points (e.g. Pioneers vs SMA,1978), history was created in local basketball in 1980 when Pioneers arrested the Police, although they had earlier defeated DGS Jets, in 1977!

ON-AND-OFF REPRESENTATION: Since the inauguration of a Women's Division as part of DABA's programme in the early 1980s, that League has not always been a regular feature on the Association's annual calendar of events and between 1988 and 2000 there were two gaps in their participation in the league. Firstly, there were no women's teams in the DABA League for a 7-year period extending from 1988 through 1994, and then for thirteen years (1999-2011).