Jump Ball No. 78: By Arlington James 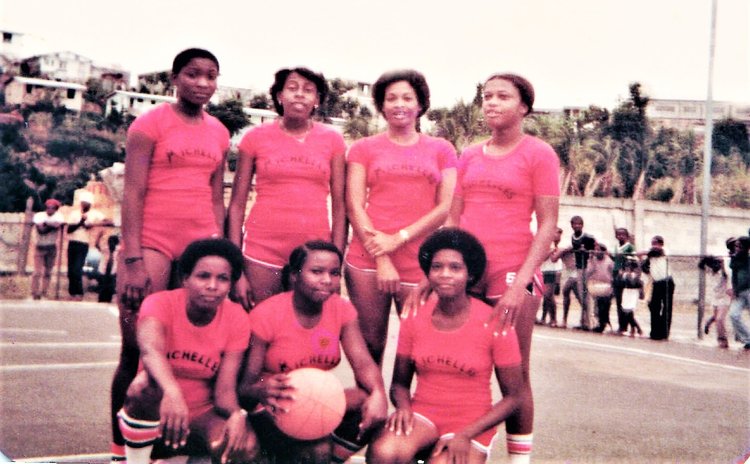 On-and-Off Representation (Ctd): Interestingly when the Women's League made its first grand return in 1995, the league was erroneously referred to in the print media as "the first-ever organized Women's Basketball League." (New Chronicle, Friday August 25th, 1995).

There was a 17-year drought of sorts in women's basketball in Dominica, from 1999 to 2011. During that period there was no women's league or team participating in the national league.

However, some women players remained active during that extended lull, engaging in friendlies against counterparts as far as Marigot. Importantly though, during that period a Dominica's Women's Team participated in a Tournament in Antigua on two occasions (See Part IV for details).

Pros were succeeded by Pioneers who remained on DABA's roster for 8 years, from 1977 through 1983, then returned in 1987 to take their final 'jumpers' and lay-ups.

They Came from Far & Wide: When women entered the basketball 'arena' in 1977, the young Pioneers ladies all hailed from the city and were mostly netballers. In time, more Roseau-based teams, most of whom were also participating in netball, joined the basketball league, but from 1982 the Women's League became decentralized.

In addition, there was one other secondary schools team, viz. Secondary Schools Girls, and two other teams that registered as Grace Hill Crew and High Flyers.

Notably, neither La Plaine, Pichelin, Pottersville nor Soufriere-Scott's Head, four of our 'basketball centres' have fielded women's teams in the national league to date.

Women All-Star Teams & in 3x3 Programme: At the end of the 1985 season the DABA selected a Women's All-Star Team although there was no Women's Division that year (the two women's teams in 1985 competed against four men's teams – and each other in Division III). Women's MVP for 1985, Alice Jno. Jules and Most Improved Female Player (1985), Daphne Edwards, both members of Radials then were included on that team.

In 2013, Northern Starz were the winners of the women's match in the Wilmoth LeBlanc Basketball Classic.

More recently, DABA has been participating in FIBA's 3x3 Programme which includes a women's component. In 2020 there were four ladies teams: Hot Shots, Lady Ballers, Northern Stars and So What.

Raising the Silverware: Over the years different teams, including one from out of town, raised championship silverware in the Women's Division. Firstly, Pros/Pros Sisters/Madech Sisters from Grand Bay was the first women's team to do a "3-peat", emerging as Women's League Champions in 1982, 1983 and 1984!

Other Team Awards: In 1985, Son Trading Radials, playing in Division III against three men's teams and Pros Sisters were presented with the Women's Team Award by DABA.

A few years later Celtics captured three League Championships, but in four years, viz. 1995, 1996 and 1998. Celtics also won the 1995 Ball-o-rama Championship, and that may have been the only such competition which was organized "for the ladies only".

Jazz had bagged the League Championship in 1997, when they broke Celtics' championship winning streak and denied their counterparts a 3-peat.

Individual Awards: Apart from the team awards captured, a few ladies have been awarded for outstanding individual performances. Such awards received and the awardees were as follows: