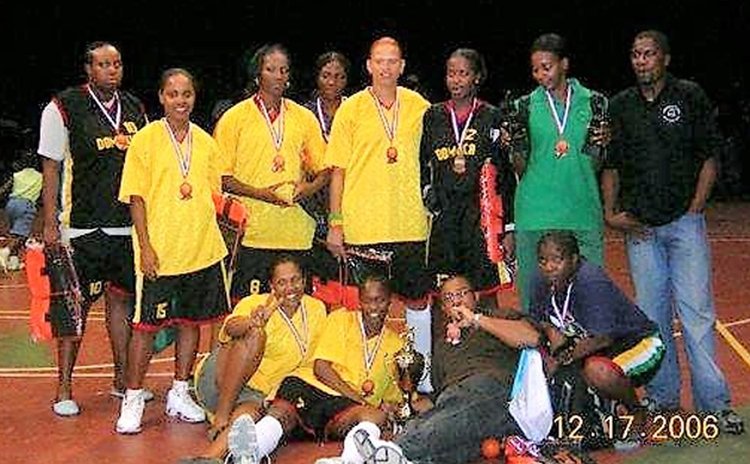 "Scoring Machines": During Alice Jno. Jules' early years on the court she was once described in the press as a "one-woman effort for Pioneers". For instance, in Pioneers' maiden victory (1977), which was versus DGS Jets, Alice reportedly scored all 28 of her team's points.

Fast forwarding to the late 1990s, we saw scoring records being set in the 1998 Women's League, only to be shattered a few matches later. When Celtics met Trafalgar Butterflies, for example, Marcia Reynold hit a spirited 41 pts for Celtics.

Then, Dinnia Joseph-Peters of Celtics scored a massive 45 points in a 76-43 victory over Trafalgar Butterflies.

The following week Dinnia's 45-point record was bettered by her teammate Marcia Reynold, who scored a hefty 48 pts against Jazz. Marcia also had the highest player-score among the four DABA Divisions that year. Unfortunately, such feats were not rewarded.

Interestingly Marcia's 48 Pts, net-burning effort was the subject of the headline of the basketball article in the Tropical Star of 18th March 1998 which read, "Reynold Raises Women's Top Score". The paper's basketball article two months prior had been captioned, "Record Score in Women's Basketball". Yes, The Press observed!

With the ushering in of the Women's League in the early '80s, we sometimes saw women's teams suffering blowout defeats at the hands of the opponents.

The following year Celtics displayed their prowess against Jazz, defeating them 90 points to 39 (a 51-Pts victory).

Well, the ladies played to win, whether the result was a 1-point victory or a merciless, crushing defeat. And, as we say here in Dominica, "A win is a win!" But a big blowout victory certainly earns enjoyable bragging rights!

Women Basketballers Representing Dominica: The first attempt at having a team of women represent Dominica in basketball manifested in 1973, and that was four years before a women's team (Pioneers) first participated in the national league.

The Star Dominica newspaper of 22nd June 1973 reported on that effort, and this is reproduced here with minor editing, "In support of that match* (played on Friday night) a Girls Basketball [Team] played a practice 20-minute match against young veterans in the league and State Team and lost 8-24. For Boys, C. James14, A. Harris 6, A. Etienne and A. Dixon 2 pts each."

*N.B. The match referred to was the Knockout Finals between Bata Pros and Caroni Cardinals; this was won by Cardinals.

Continuing with the Star's article the latter noted, "The girls who played that match are presently being trained by veteran Clem Severin – one of the longest-playing [basketballers] around – in preparation for a female touring team that will be in Dominica, when By-Trinee Electrons put on their tournament at the St. Mary's Academy court." That tournament had been rescheduled for 24th – 29th July, after being postponed from the previous month.

However, due to unforeseen circumstances and as reported in The Star of 27th July 1973, "The By-Trinee Electrons Basketball Team had to call off their own organized first West Indies competition after receiving phone calls from overseas teams that they could not participate because of the present state of affairs…" And so disappeared some wasted effort by the young ladies. [Electrons, who were in their debut year, was a top team in the League.]

Fast-forwarding to the decade of the '90s, Dominican women again got the opportunity to represent Sisserou Land in basketball. In 1996, the DABA announced a 16-woman squad for training for the OECS Women's Basketball Tournament in St. Lucia in September that year. However, the local press did not report further on that tournament.