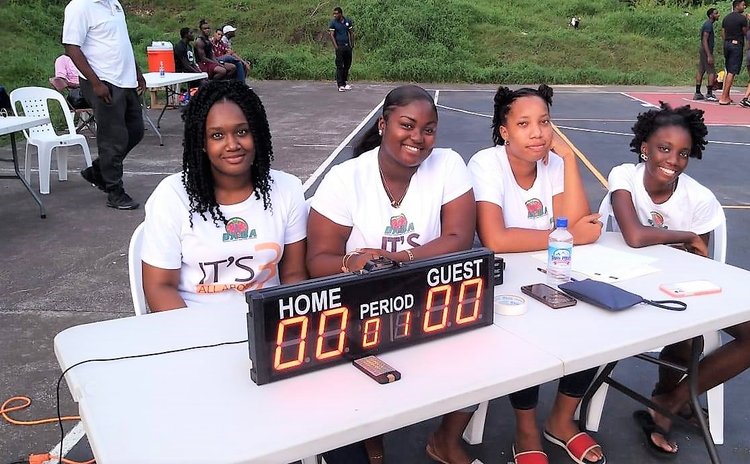 Part III of the article presented on high-scoring women; women's teams meting out or conceding blowout defeats; and women basketballers representing Dominica (in part). The article concludes below.

Women Basketballers Representing Dominica (Ctd): Fortunately, in 2006, with some effort and possibly for the first time ever, a team of Dominican women basketballers represented their homeland. That year Dominica's Women's Basketball Team participated in the Gillian Brazer Basketball Shoot-out Championship in Antigua and the Sisserou Girls, led by Coach Mickey Joseph, placed a reasonable 3rd among the six participating teams.

Four years later (2010) the Dominica Women's Team participated in the 11th Annual Gillian Brazer Basketball Championship, but had to settle for 4th place.

The year 2010 also saw girls' basketball being introduced into the Windward Islands "Inter-Schools" Games, and Dominica has been participating since then, capturing their first Championship in 2018!

A few years later, in 2017, a Dominica Women's Team coached by "Washway" Douglas engaged a top Martiniquan women's basketball club in an invitational encounter in Martinique.

Women In Grand Bay & Portsmouth Leagues: Quickly shooting down to Sout' City Grand Bay, in the 2010/2011 edition of that community's basketball league fans were entertained by two women's teams, viz. Lady Pros and DTP Girls participating in that competition which showed no gender bias. These women even defeated a few of their 14 male opponents, and this was previously reported in Jump Ball's "Listwè Basketball An Gwanbé" in 2018.

Dribbling up North, there were some editions of the Portsmouth Basketball League which included a Women's Division, with PSS Girls A, PSS Girls B, Northern Starz, and teams from Bense, Paix Bouche and Portsmouth on the cards. In other instances, the couple of ladies' teams who had registered played against the men.

Women In Basketball Administration: Over the years, women – not necessarily players – have held positions on the Dominica Amateur Basketball Association's Executive. Topping that list was Mrs. Udean Grove who held the reins as President. Udean, a non-basketballer, was elected in 1996 but served only part of her term.

Meanwhile, Sawana Fabien serves as the Athletes Commission Representative of the Dominica Amateur Basketball Association, and she was quoted in The Women's Basketball News Server (8th July 2019) as saying that "Women are not forgotten."

Women Table Officiating: Apart from holding positions on the court and on the DABA Executive, a number of women have also served as Table Officials (scorers, statisticians) for National League games and sub-regional tournaments, or for friendlies involving the National Men's Team. A handful of those ladies also played on Women's teams.

Sponsors Of Women's Teams: We are all aware of the importance of sponsorship to the success and longevity of a sports club/team, and over the years several women's basketball teams participating in the national league have been sponsored by private sector entities.

The Women's Division was never sponsored, as was the case with some of the Men's Divisions around 2013-2015, but ladies' teams benefitted from the sponsorship of loyal, local sponsors.

On behalf of all women's teams and individual players, Jump Ball says THANK YOU to the sponsors. Your generosity helped keep women's basketball alive in Dominica.

Remarks: Jump Ball salutes all those ladies who have contributed to basketball development in Dominica, either as players, representing Dominica, table officials or administrators.

Jump Ball acknowledges Alice, Carol, Mickey and Maggie for their contributions. Most of the information presented in the article was sourced from archived newspapers and Online.