Despite the fact that political parties want Ossie Walsh, the Registrar of the High Court, to re-enter active politics and run in Roseau South, Walsh says that's just talk 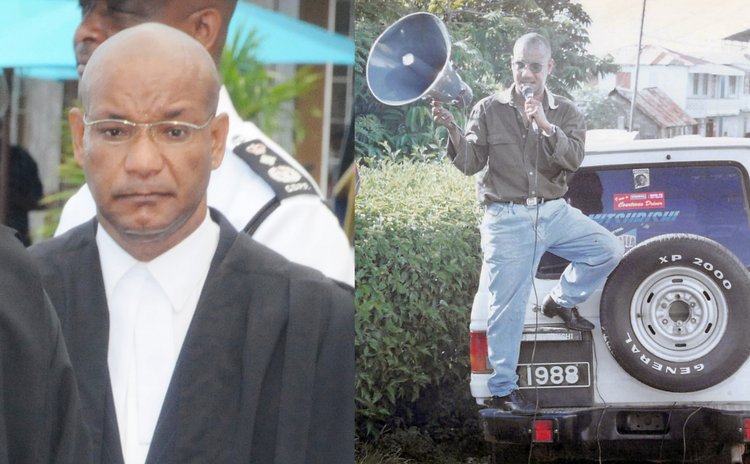 Wash as Registrar today (left); decades ago Walsh as politician

Ossie Walsh, the Registrar of the High Court, who retired from active politics 17 years ago, may be on the verge of returning to the political arena.

Walsh contested the 1990 and 1995 general elections in the Roseau South constituency on a Dominica Freedom Party (DFP) ticket and won that seat. In 1998 he left politics to pursue a law degree; he did not contest the 2000 general elections. Walsh returned to Dominica in 2003 but since then he has stayed away from active politics.

But sources close to the Dominica Labour Party (DLP) and Walsh himself told the SUN that Walsh is being considered as a potential candidate.

"And I am telling you that he will be our man," the source said. " He is the only person who can give us (DLP) back that seat, we have no confidence in Jasiah Benoit and we are putting things in place for Ossie."

"We are talking to him, he is my good friend and I have to convince him, but you know that the package must be good for him so that is where we are. In the meantime, he has been meeting people to get the vibes," the source revealed.

Jasiah Benoit is a DLP Senator in the Dominican parliament and he is regarded as the DLP caretaker in the Roseau South constituency currently held by Joshua Francis of the United Workers Party(UWP).

In an interview with the SUN, Walsh admitted that he has been spoken to by members of the UWP and also the DLP but for now he was comfortable in his job.

"What you are hearing is what I am hearing, I don't know what is going on…this is ridiculous lots of talk going on and I am just listening. People on the ground are encouraging me, nothing concrete, it's all about people driven that I reenter politics. I am just doing my work as a lawyer. I have been there and done that successfully. I am not saying that it's impossible to return…especially if the conditions are right," he said.

He continued: "One must never say never but as of now, I have no proposals before me from anyone. People from both sides of the fence have been talking to me."

He denied allegations that he has been in discussions with Prime Minister Roosevelt Skerrit on the matter.

"I have never spoken to the PM but I have spoken to other operatives of the DLP and the UWP; they are all my friends. I have not expressed any interest in returning, people are more interested in me returning and I see nothing wrong with that. For now, I am comfortable in my job and is doing my work dutifully," he said.

Walsh says that he has another four years in the post of Registrar before he retires.

Francis of the UWP, the embattled parliamentary representative for Roseau South, who is presently embroiled in a court controversy, has made it clear that he will be on the ballot for the next elections and that he will "defeat anyone who runs up against him."

When contacted for comments on the possibility that Walsh may run on a DLP ticket Francis said, "I have heard that and I have called him and told him that I will defeat him soundly, he can come I am ready and waiting."