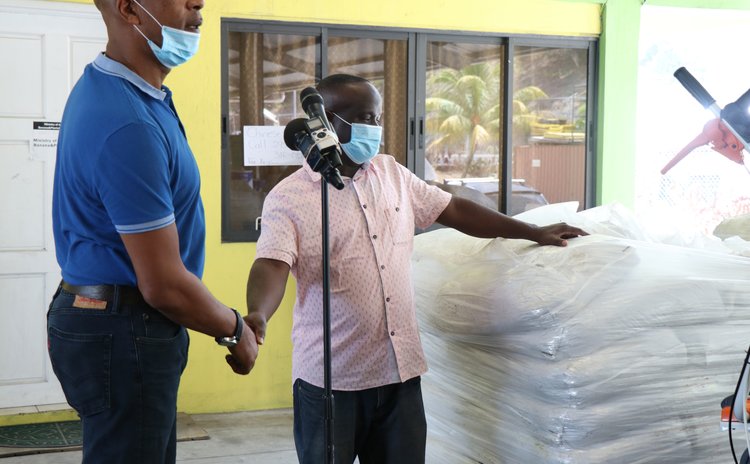 Burton,rt, and Stephenson at the fertilizer presentation

Things are gearing up for small and micro farmers to receive their share of the World Bank's farming programme.

"These are farmers who did not qualify under the project who had less than a quarter acre but more than 3000 sq. feet", said project manager, Kervin Stephenson last week.

Speaking last week during a hand-over ceremony of inputs and equipment to the ministry of agriculture, Stephenson said these small farmers will begin registering on line from 1 June; they will receive up to $500 worth of inputs.

Funded by the World Bank, the EC$68 million "Dominica Emergency Agricultural Livelihoods and Climate Resilience Project" (DEALCRP), the programme that began in 2019 hopes to restore the damage caused by Hurricane Maria in September 2017.

In September 2017 category five hurricane Maria destroyed an estimated 80 to 100 % of root crops, vegetables, bananas and plantains and 90 % of tree crops; livestock losses were estimated to be 45 % of cattle, 50 % of small ruminants, 65 % of pigs and 90 % of chicken stock.

In total, damages were estimated at US$179.6 million. The fisheries sector lost about 370 vessels.

So far, the DEALCRP has begun delivering on the project's Sub Component A1- Restoration of Farmers Cropping System, the project said in a recent press release. On January 20, 2020, crop farmers began signing beneficiaries' agreements, allotted vouchers and collecting agricultural inputs and tools and equipment. As of March 6, 2020, eight hundred farmers have signed beneficiary agreements and 595 have collected agricultural inputs to include agrochemicals and fertilizers, the release stated.

Next on the programme, Stephenson said, is the processing of applications for the cash transfer aspect of the project.

Small farms of less than two acres are expected to receive EC$700; medium sized farms of two to five acres -$1,400 and large farms of more than 5 acres-$2,800. On registration farmers will present land documents; proof of sale of produce DEXIA, supermarkets and exporters will be accepted if land documents are unavailable.

"The project is opening up next week to facilitate new entries, new registration," Stephenson said.

Meanwhile, last week DEALCRP provided 108 bags of organic fertilizer to the Forestry Division to help it develop eight nurseries around Dominica to meet its goal of producing 100,000 plants for replanting damaged forests. The Division of Agriculture also received soil tilling equipment for assisting backyard gardeners and micro farmers in soil preparation, especially during the dry season.

"Not even a manual fork can go in the ground right now because of the dryness," Stephenson said.