World Rivers Day 2018: When the river floods, it doesn't flood one man's house 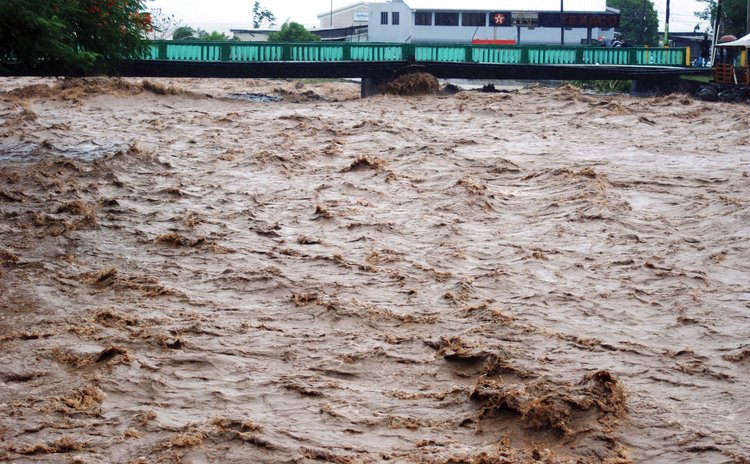 Let's express thanks to Catholic priest Farther Franklyn Cuffy for keeping the waters of World Rivers Day flowing. Utmost single-handily, Father Cuffy has kept Dominicans interested in World Rivers Day (WRD) the global campaign aimed at keeping rivers alive. In 2018, just after we observed the first anniversary of Hurricane Maria and we endured the scare of little Tropical Storm Isaac, Father Cuffy is about to implement a mini-WRD 2018 programme.

According to an invitation that Fr. Cuffy has been circulating, the major event for WRD will be held between the Stadium and Bath Estate bridges in Roseau. The theme for this year's celebration is: Strengthening Communities to Appreciate Rivers. Part of that appreciation, we believe, is for Dominican to live in harmony with our numerous waterways. We must understand that we turned our rivers into deadly monsters when we ignore, for decades, basic environment laws. It's not God punishing us when rivers and ravines ravage our communities; we have, essentially, transformed our rivers into killers.

As Dominicans observe World Rivers Day on 30 September 2018 in our usual laid-back manner, the island is still reeling from the pounding it received from the category five Hurricane Maria almost one year ago.

Nonetheless, Dominicans continue to take their rivers and watersheds for granted and, as a tangible example of that fact, they ignore important events like WRD that help raise awareness of the importance of rivers and the need to keep them alive for future generations.

As we said in an editorial on the subject last year, Dominica should be leading the way in celebrating, utilizing and preserving rivers and waterways and events like World Rivers Day should be one of the most important days on the island's calendar. But it is not and very likely it will never be until we miss the water as the rivers run dry.

The fact is all our rivers are dying or already dead-all 365 (real or imagined) of them- and it appears that our government and its citizens couldn't care less. For instance, WRD 2018 is to be held in less than two weeks but apart from the exemplary efforts of Father Cuffy, we can bet there will be no other plans or pronouncements urging people to observe that important occasion. Nevertheless, rivers, lakes and waterfalls mean so much to our existence. Especially our tourism product.

That our rivers are dying right before our very eyes is undisputable; but what is perplexing is that we say and do very little as we sadistically watch them slowly die away. Our government, the ministries of education, tourism and forestry, in particular, and the private sector institutions such as DOWASCO and DOMLEC, must find a way to raise awareness of the state of Dominica's rivers because without rivers their businesses will be much less lucrative and attractive.

In addition, as we suggested last year, Prime Minister Roosevelt Skerrit, the country's minister of finance must look beyond the building of resorts. He should be utilizing some of the finance derived from the Citizenship by Investment Programme (CBI) to fund research and development programmes aimed at saving our rivers. Without rivers Dominica will become a wasteland and the proposed resorts of the Skerrit Administration will become giant white elephants. Unless the people we expect to live in these resorts have something to see and admire, like our rivers and lakes and waterfalls, they will not come to Dominica; people do not travel to countries like Dominica just to live in resorts because there are many luxurious hotels closer to their homes, in Miami, Atlanta or London. They come to Dominica to admire and enjoy nature, partake in our music and dance and enjoy our cuisine. Destroy our rivers, or watch them die and do nothing to save them, and you can effectively say goodbye to tourism.

In fact the newly formed CREED must make saving Dominican rivers one of its key mandates because Dominica cannot become a climate resilient nation if its rivers are not protected from deforestation and continue to be the people's garbage-dumping grounds. Dredging alone is not the answer; we must do more to keep rivers from becoming raging monsters that wash away our homes, rivers and bridges.

As we reiterate year after year in our editorials in the SUN, Dominica's rivers face a number of challenges such as pollution, deforestation and urbanization. The mega storms like Maria affecting the region and the increasingly frequent tropical waves help pollute our rivers with storm water laden with sewerage and toxic waste. But the greatest threat to our rivers and waterways is neglect. And abuse.

World Rivers Day is an annual celebration of the world's waterways with people around the globe taking part in local events such as paddle tours, nature walks, tree plantings, river clean-ups and community festivals. For WRD 2018, Fr. Cuffy has planned a "resilient fruit festival" (whatever that is) among a number of other activities.

But Cuffy's greatest challenge will be to engage the whole community in appreciating rivers. And in this era of political divisiveness, it will be a task to keep communities focussed on the state of our rivers.

But it would help to paraphrase Bob Marley in the song "So Much Things to Say":