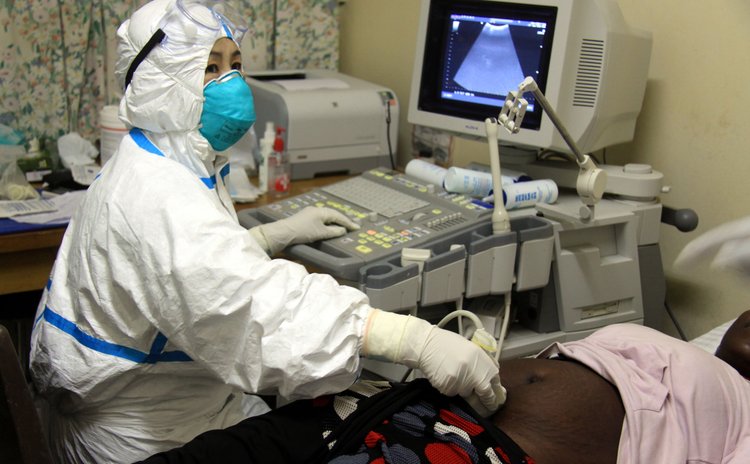 The two-year-old girl had travelled with her grandmother hundreds of kilometers by bus from Guinea via Mali's capital to the western town of Kayes, where she was diagnosed on Thursday. Health workers were scrambling to trace hundreds of potential contacts in a bid to prevent Ebola from taking hold in Mali.

A recent report from the World Health Organization (WHO) said the Ebola disease has killed 4,877 people, mainly in nearby Liberia, Sierra Leone and Guinea, and there have been a total of 9,936 confirmed, probable and suspected cases of Ebola.

Noting that helping West Africa to cope with the Ebola crisis is the most effective way to prevent a serious outbreak of the disease elsewhere, the international community is making due efforts.

Strict protocols are in place in the Ebola-affected countries to protect UN personnel and prevent further transmission, while UN clinics in the three hard hit countries are being upgraded, Deputy UN spokesman Farhan Haq said.

While warning transmission remains "intense" in the capital cities of the three African countries and cases continue to be underreported, the WHO pointed out a lack of available beds in Ebola clinics is forcing many families to care for sick relatives at home, risking a further spread of the virus. Liberia has the worst bed shortage, with only 23 percent of patients hospitalized.

The WHO estimated 4,388 beds are still needed in West Africa.

China will provide urgently needed materials such as hospital beds, ambulances, motorcycles and protective equipment for the three hardest hit African countries. It will also help build a treatment center in Liberia with about 100 beds and send medical staff to operate it, Foreign Ministry spokesman Qin Gang said.

China will also launch a cooperative program on public health between China and Africa. Under the program, China will hold 12 training courses on public health and disease prevention and control for Africa, conduct joint research on tropical diseases and help Africa build a platform of public health information and a network to prevent, control and supervise epidemics, Qin said.

On Friday, the European Union agreed to boost its aid for Ebola-hit West Africa to 1 billion euros (about 1.26 billion U.S. dollars).

Mexican Foreign Ministry said in a statement Friday that the country will make a financial contribution to equip the contingent with doctors and health care workers Cuba has sent to Africa to fight the spread of the disease.

Cuba has so far sent 165 doctors and nurses to Sierra Leone and 51 health workers to Liberia to combat the disease.

In the United States, one of the five affected countries, a medical doctor was tested positive for the Ebola virus, the first confirmed case in New York, after both nurses who contracted Ebola while caring for a patient from Liberia have recovered.

Many New Yorkers were dismayed to learn that in the days after Dr. Craig Spencer came home, he rode the subway, took a cab, went bowling, visited a coffee shop and ate at a restaurant in the city of 8 million.

The authorities tried hard to assure an anxious public that the likelihood of Spencer disseminating the virus is very low.

The governors of New Jersey and New York on Friday ordered a mandatory, 21-day quarantine of all medical workers and other arriving airline passengers who have had contact with victims of the deadly disease in West Africa.

U.S. military personnel in Texas were in the first stages of training a 30-member new rapid-response team to supervise treatment and help hospitals deal with the intricacies of treating Ebola.

Meanwhile, progress has been made in developing Ebola vaccines.

WHO Assistant Director-General Marie-Paule Kieny said in Geneva Friday that hundreds of thousands of Ebola vaccines might be ready to use in the first half of 2015 to turn the tide against the deadly Ebola epidemic.

On Thursday, the WHO convened a meeting of government representatives, vaccine manufacturers, funding agencies and civil society, to discuss how to quicken the testing and deployment of promising vaccines in sufficient numbers to use in the field in 2015.

"Phrase 1 of clinical trials of two most advanced vaccines have been started, the result of these trials will be available in December 2014," Kieny said.

Kieny said the trials of the two most advanced vaccines, cAd3-ZEBOV and rVSV-ZEBOV, developed by GSK and Public Health Agency of Canada respectively, have begun in Britain, the United States and Mali, and will shortly begin in Switzerland, Germany, Gabon and Kenya.