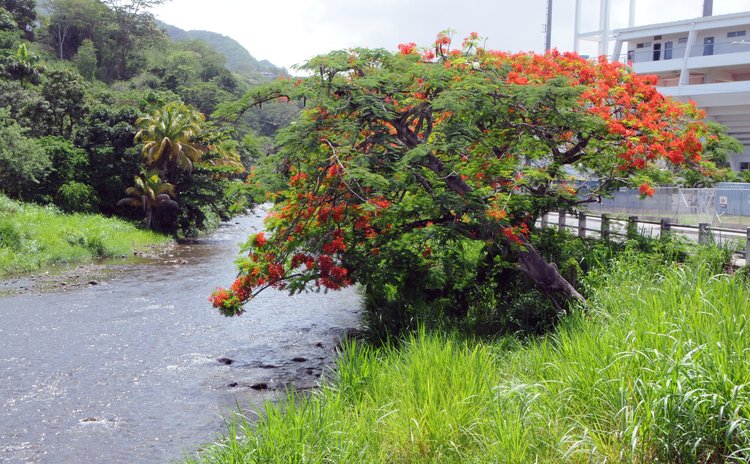 Leaning towards free-flowing water of the Roseau river

Rivers and water in general, are integral parts of Dominican life. Without rivers, and fresh, pure water, Dominica would be a poor country indeed. In fact, almost every tourist attraction that we boast about every day is based on water- rivers, lakes, waterfalls, glosho. Even Dominica's national anthem proudly attests to that. It says, in part:

But we do not truly believe that our rivers are "rich and rare" gifts from God because we have such an indifferent attitude towards rivers and our abundant water supply. We couldn't care less. Unfortunately, we take our rivers for granted but we'll never miss the water until our water sources, our rivers, run completely dry. And that could happen sooner than we think.

Dominica's rivers, and hence our water supply, is being threatened by poor water shed management and deforestation. A study of a few years ago by former forest officer Michael Zamore revealed that Dominica had been losing its forests at an alarming rate (the banana industry boom was the culprit) and that has adversely affected the state of our rivers. What's more disturbing there's no official Government, or quasi government, department that is explicitly responsible to budget and programme to protect Dominica's water resources. Not DOWASCO, not Forestry, not Tourism, not the Environment department and certainly not Health.

So there's no organisation to take a closer look, for instance, at the objectives of United Nation's World Water Day (WWD) programme and incorporate them in our national agenda.

In one of his message in observance on WWD, observed internationally on 22 March, the United Nation Secretary General warned that with the onset of climate change, growing demand on finite water resources from agriculture, industry and cities, and increasing pollution in many areas are hastening a water crisis. That crises, he said, can only be addressed by cross-sectoral, holistic planning and policies – internationally, regionally and globally.

The Government of Dominica should be complemented for making the elimination of pit latrines one of its major health and environment polices. We only hope the implementation will be successful.

But, Dominicans must begin to recognise that we are in a water crisis in the Caribbean and also the rest of the world. In fact, the World Water Council warns that there is a water crisis today. But the crisis is not about having too little water to satisfy our needs; it is a crisis of managing water so badly that billions of people - and the environment - suffer badly.

The WWC is of the view that there is increasing awareness that our freshwater resources are limited and need to be protected both in terms of quantity and quality. Water is, therefore, everybody's business; this, incidentally, was one the key messages of the second World Water Forum in The Hague in 2000.

DOWASCO, Dominica's Water and Sewerage Company, understands the implications of the drying up of our rivers because most of the company's water supply comes from about 80 rivers that pour out alongside the east and west coastline due to rugged forests and generous rainfall.

For many years now DOWASCO has been pressing our policy makers for suitable procedures for governing water and land resources, for an integrated water resources management plan, for a system for determining the water volumes in major catchment areas, for a more effective land use plan and for designation of certain catchment areas as protected areas. DOWASCO is still pressing government for a response.

As we observe WWD on Wednesday March 22, we hope the issue of protecting our dwindling water resources was on the minds of our leaders in the public and private sectors. God forbid, we must not wait for our rivers to run completely dry before we make moves to protect them. If we do we will face crises-in health, agriculture, tourism, manufacturing business- of unimaginable proportions.