World Water Day in the era of Maria-like hurricanes 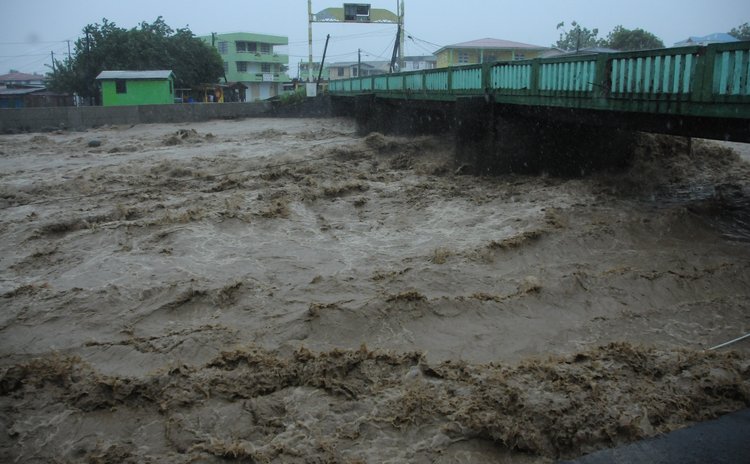 Raging water of the Roseau River

Following Hurricane Maria Dominicans may have developed an acute love-hate relationship with rivers and streams but undoubtedly these waterways belong to the group of natural assets that the writer of our national anthem described as "gifts so rich and rare". God blessed us by giving us so many rivers.

As Dominicans observe World Water Day on 22 March 2018 in our usual lackadaisical manner, the island is preparing for another hurricane season that potentially could be as destructive as the hurricane season of 2017.

As we continue to accept a helping hand from our friends and relatives all over the world, we still feel traumatized after Hurricane Maria showed how destructive nature can be when it unleashes its full fury on an unprepared land mass.

As you can see, the country's housing stock has been destroyed and thousands still live in tents and shelters and under tarpaulin-covered roofs. For many electricity and water are still scarce commodities but thankfully our rivers and "souses" provide some solace, for bathing, washing and for performing other personal functions. Unfortunately the people living in these islands in the northern Caribbean that Irma and Maria devastated do not have the luxury and privilege of using rivers that Dominicans had in 1979, and in 2017 for that matter.

Nonetheless, Dominicans continue to take their rivers and watersheds for granted and, as a tangible example of that fact, they ignore important events like WWD that help raise awareness of the importance of rivers and the need to keep them alive for future generations.

As we said in an editorial on the subject last year, Dominica should be leading the way in celebrating, utilizing and preserving rivers and waterways. WWD (and World Rivers Day as well) then should be one of the most important days on the island's calendar. But it is not.

The fact is all our rivers are dying or already dead-all 365 (real or imagined) of them- and it appears that our government and its citizens couldn't care less. For instance, WWD 2018 is to be held in two days but apart from the exemplary efforts of Father Franklyn Cuffy, there appears to be no plans, no pronouncements, urging people to observe that important occasion. Nevertheless, rivers, lakes and waterfalls mean so much to our existence.

That our rivers are dying right before our very eyes is undisputable; but what is perplexing is that we say and do so very little as we, almost sadistically, watch them slowly die away. Our government, the ministries of Education, Tourism and Forestry in particular and the private sector institutions such as DOWASCO and DOMLEC should be leading the way towards raising awareness of the state of Dominica's rivers because without rivers their businesses will be much less lucrative and attractive.

In addition, as we suggested last year, Prime Minister Roosevelt Skerrit, the country's minister of finance must look beyond the building of resorts. He should be utilizing some of the finance derived from the Citizenship by Investment Programme (CBI) to fund research and development programmes aimed at saving our rivers. Without rivers Dominica will become a wasteland and the proposed resorts of the Skerrit Administration will become giant white elephants. Unless the people we expect to live in these resorts have something to see and admire, like our rivers and lakes and waterfalls, they will not come to Dominica; people do not travel to countries like Dominica just to live in resorts because there are many luxurious hotels closer to their homes, in Miami, Atlanta or London. They come to Dominica to admire and enjoy nature, partake in our music and dance and enjoy our cuisine. Destroy our rivers and you can effectively said goodbye to tourism.

In fact the newly formed CREED must make saving Dominican rivers one of its key mandates because Dominica cannot become a climate resilient nation if its rivers are not protected from deforestation and continue to be the people's garbage-dumping grounds.

World Water Day is an annual celebration of the world's waterways with people around the globe taking part in local events such as paddle tours, nature walks, tree plantings, river clean-ups and community festivals.

As we reiterate year after year in our editorials in the SUN, Dominica's rivers face a number of challenges such as pollution, deforestation and urbanization. The mega storms like Maria storms affecting the region and the increasingly frequent tropical waves help pollute our rivers with storm water laden with sewerage and toxic waste.

But the greatest threat to our rivers and waterways is neglect. And abuse.