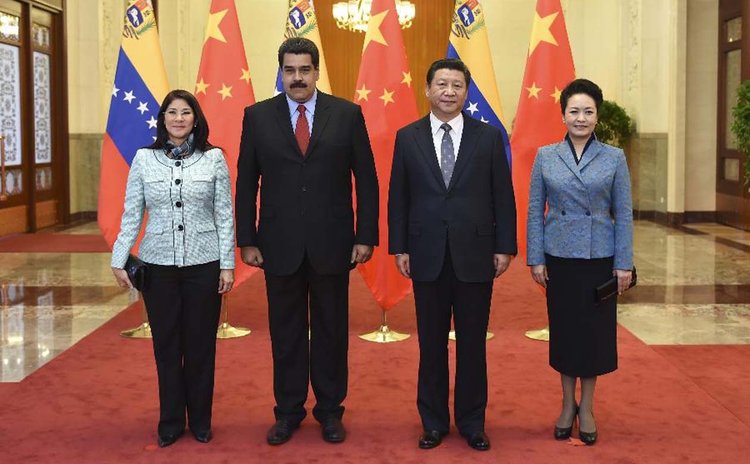 China President Xi Jinping(2nd rt) and his Venezeullan counterpart and their spousesat their meeting in Beijing, China. Jan 7, 2015

Trade and investment targets were included in a renewed pledge by President Xi Jinping on Thursday to boost China's economic support to Latin America.

The president's promise came as a landmark meeting opened in Beijing that is expected to result in key documents mapping out future cooperation.

China's investments in Latin America will reach $250 billion in the next decade and two-way trade will almost double to $500 billion during the same period, Xi said.

He was speaking at the opening ceremony of the first ministerial forum between China and the Community of Latin American and Caribbean States.

The two-day forum marks the first time China has hosted the 33-member body, which comprises all countries in the Americas apart from the United States and Canada.

The gathering will draw up a cooperation plan through to 2019 on trade, investment, finance, infrastructure, energy, industry, agriculture and other areas, Xi said.

It will also produce a Beijing Declaration that sets a direction for the forum and defines cooperation guidelines as well as forum regulations, he added.

Xi said China's economy will continue to grow impressively in coming years, highlighting the potential for stronger ties between the country and Latin America, whose combined population accounts for one-third of the world's.

Trade between China and the region grew from $10 billion in 2000 to $257 billion in 2013, driven largely by Chinese demand for commodities such as oil and agricultural products.

In return, China has pumped billions of dollars in investments into the region.

In July, China extended a $20 billion loan to the region for infrastructure development, another $10 billion in preferential loans and a $5 billion cooperation fund.

Besides traditional trade, especially in commodities, China is placing more emphasis on extending investment and financing to sectors like infrastructure and technology, Sun said.

Wang, the former ambassador, is confident the economic cooperation goals will be realized, saying this will help some Latin American countries to restructure oil-reliant economies and nurture markets for outbound business from China.

Venezuelan President Nicolas Maduro, who attended the opening ceremony with several other Latin American leaders, said the forum is a historic occasion.

"To repeat what (former Venezuelan) president Hugo Chavez said, China is demonstrating to the world that a country does not necessarily seek hegemony as it grows stronger," Maduro said at the ceremony.