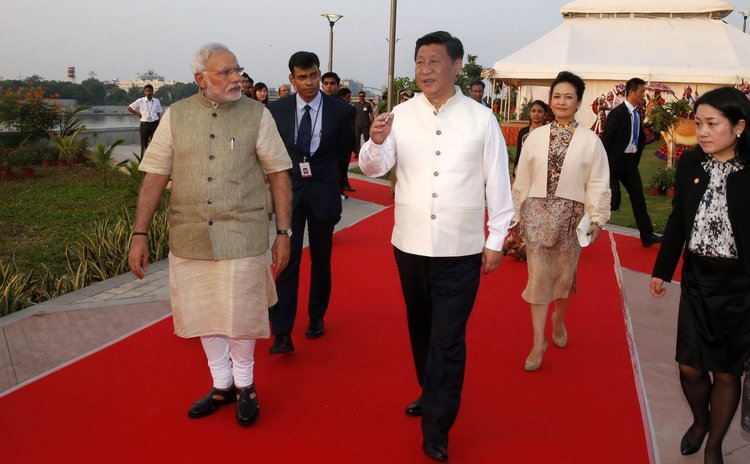 It is Xi's first trip to India since he took office in March 2013, and also the first state visit in eight years by a Chinese president to the country.

At the airport, Xi was presented with flowers by each minister of Gujarat and greeted by Indian youths performing local traditional dance.

Thousands of citizens stood along the streets in Ahmedabad to extend their welcome with warm applause when the convoy of the Chinese delegation was en route from the airport to the hotel Xi stays in.

In a written speech delivered at the airport, Xi extended the Chinese people's sincere greetings and good wishes to the Indian people.

China and India, as neighbors, have kept friendly exchanges for thousands of years, Xi said.

"It is the shared expectation of both peoples for the two nations of ancient civilizations to realize rejuvenation hand in hand," Xi said.

"The Chinese side is willing to work with the Indian side to forge a closer development partnership and jointly realize our great dreams of building strong and prosperous nations," he said.

Xi said he looks forward to meeting Indian President Pranab Mukherjee and Modi, as well as politicians of different parties and people from all walks of life, in order to chart the course for the future development of China-India relations and open up a new chapter in bilateral interaction.

China is India's largest trading partner, while India is China's biggest in South Asia, with two-way trade totaling about 65.5 billion U.S. dollars last year. The two countries have set a target of increasing their annual bilateral trade volume to 100 billion dollars by 2015.

Ahmedabad, a commercial hub, is the center of India's textile industry. It is the largest city of Gujarat and also the former capital of the state.

Xi is scheduled to attend a few joint events with Modi in Ahmedabad Wednesday afternoon before flying to capital New Delhi in the evening.

Modi had served as chief minister of Gujarat for over a decade before being sworn in as the country's prime minister in May.

Shortly after Modi's landslide victory in the election, China sent Foreign Minister Wang Yi to New Delhi in June as Xi's special envoy, which delivered a message that the world's two most populous nations are "natural partners" rather than "rivals."

Xi and Modi had their first meeting in July in Brazil at the sixth summit of the emerging-market bloc of BRICS.

India is the last stop of Xi's four-nation tour in Central and South Asia, which has already taken him to Tajikistan, Maldives and Sri Lanka. In Tajikistan, he also attended a summit of the Shanghai Cooperation Organization.