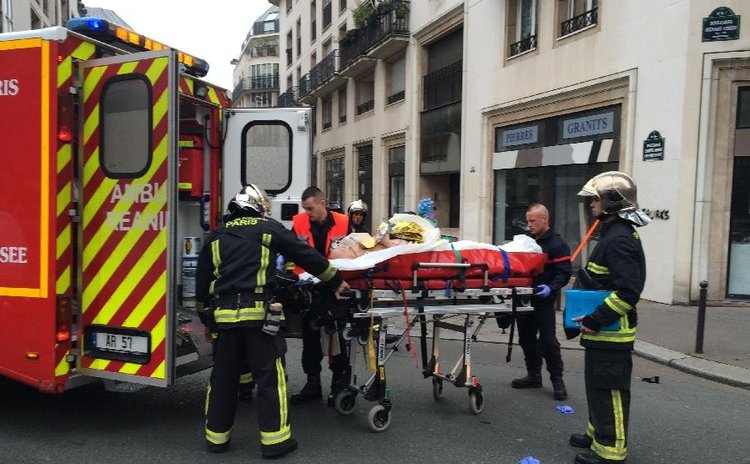 Firefighters carry an injured man on a stretcher in front of the offices of the French satirical newspaper Charlie Hebdo in Paris on January 7, 2015. (Xinhua/AFP Photo)

SANAA, Jan. 14 (Xinhua) -- The Yemen-based al-Qaida in the Arabian Peninsula claimed responsibility for attacks on Charlie Hebdo and a Jewish supermarket in Paris, in an online video released Wednesday.

"We, the al-Qaida in the Arabian Peninsula (AQAP), claim responsibility for this operation as a vengeance for the Messenger of Allah," AQAP military leader Nasr al-Anisi said in the 11-minute online video.

"We clarify to the Islamic nations that the one who chose the target, laid the plan and financed the operation, is the leadership of our organization AQAP," he said.

They charged that they have avenged the honor of the prophet Muhammad, which featured in caricatures of the magazine published.

One day later, an apparent associate of the Kouachi brothers, Amedi Calibouli, killed a French policewoman and on Friday took over a kosher market and held hostages, demanding that the brothers would be released as they were in a standoff with French authorities northeast of Paris.

The three militants and four hostages in the supermarket died, while several others were seriously injured.

Al-Anisi also warned that "stop your insults on our Prophet and sanctities... otherwise, you will look for peace and stability but you will not find it."

Yemen has been gripped by the most active regional al-Qaida insurgency in the Middle East. On Jan. 7, a car bomb attack against the police academy in the Yemeni capital of Sanaa killed about 50 people. The government blamed AQAP for the attack.

AQAP, which emerged in January 2009 and also known locally as Ansar al-Sharia, had claimed responsibility for a number of attacks on Western interests in the impoverished Arab country.

Yemeni officials said one of Kouachi brothers had travelled to Yemen and met with AQAP leader Anwar al-Awlaki to receive military training before Awlaki was killed in a U.S. drone strike in Yemen in September 2011.

In 2009, AQAP claimed responsibility for an attempt to bomb a U.S.-bound airliner by sending a bomber recruited by Anwar al-Awlaki in Yemen and had been trained by the militants there.

In 2010, the group also claimed responsibility for a foiled plot to send two air freight packages containing explosives through planes to the United States.