"You have one month"

Threatening action, that's what parents of DGS students say to Ministry of Education 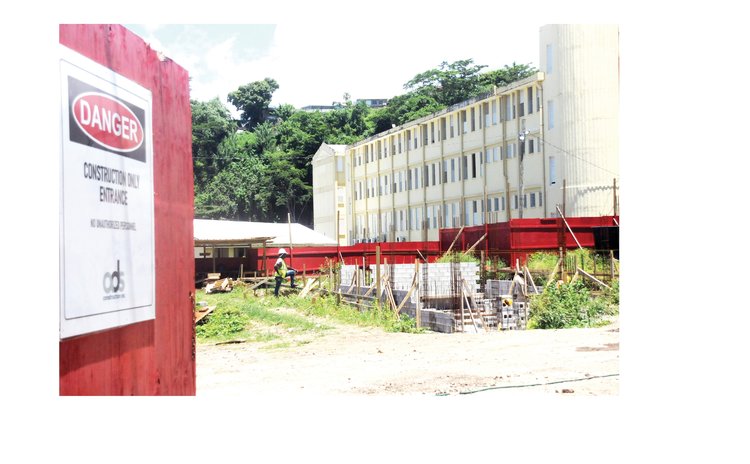 Ongoing construction at the DGS

Parents of the Dominica Grammar School (DGS) have threatened action if face-to-face learning for students does not resume in a month.

"When will the education of our children be prioritized," questions a DGS parent who, like many others, is frustrated over the tardy announcement of hybrid learning for DGS students.

On September 1st, 2022, a few days prior to the September 5 reopening of the academic year, parents were called to a meeting where they were informed by education officials of the delayed resumption of full face-to-face classes for students of the DGS.

Sources revealed the reason for such a decision is inadequate space.

"We were told that the government is building core houses to accommodate all the students," one parent told The Sun. "They said it will take a few months to build and during that time the students must do some days in person and some days online."

The mother of a third-form student said this proposal was wholly rejected and parents present at the meeting gave education officials a one-month deadline to completely resume face-to-face learning for all students.

She insisted that the last-minute announcement leaves parents in a lurch and voiced her disapproval of the Ministry of Education's "lack of preparedness."

"We should have been informed of this decision earlier. Some parents like myself purchased several new uniforms, more than my child will use, books and other stationeries. There is also the issue of supervision of our children. Many of us don't have the privilege of working from home nor are we comfortable leaving our children home alone," she said.

According to the new shift system, First and Second Formers will attend school in person on Mondays and Thursdays; Third and Fourth Formers on Wednesdays, Thursdays, and Fridays while Fifth Form students are the only group who will conduct face-to-face from Monday to Friday. Classes will run from 7:45 a.m. to 12:30 p.m. so as to accommodate Goodwill Secondary School (GSS) students who will continue to use DGS for the classes which will commence in the afternoon.

Another parent who we spoke to deems the late announcement as "disappointing," noting his concern about remote learning.

"This is the third year we're doing this and you would think by now that the government would have stuff in place," he said. "The government had almost three months during the summer vacation to put things in place to better accommodate the students and teachers and here we are again. Our student's education is not at the fore."

He added, "It's going to be another stressful term. Some students don't learn as well when they're online," recalling what he said he witnessed during past stretches of virtual classes. "It's so easy for them to tune out [and] just not pay attention."

As it relates to the GSS, they too will also take on a hybrid style of learning this term and parents are also expressing their displeasure but have communicated no form of action.

The secondary school which is located in Potterville, near the E.O. LeBlanc highway, accommodated students from Fond Cole, Gutter, Yam Piece, Tarish Pit, Stockfarm, Bellevue Rawle, Lower Goodwill, Pottersville and other student dropouts from across the island has since been forced to operate under a shift system with the DGS for over 50 months.

The government has made countless promises to repair the school, dating all the way back to 2016, when then education minister Petter Saint Jean announced during a principal's meeting held at the Public Service Union (PSU) building that the government will commence work on the designs for a new GSS in the new financial year. To date, nothing has been done.

While the incumbent education minister, Octavia Alfred promised that the GSS will be one of six learning facilities across the island to be reconstructed by the People's Republic of China (PRC), parliamentary representative of the Roseau North Constituency, Danny Lugay, recently told The Sun, he holds the view that his constituency is being politically victimized for not supporting the present administration and they're being "taken for granted."

The Sun's attempts to speak to education officials on the situation at the DGS proved futile; however, we will continue to follow this story.