You Loot, We Shoot 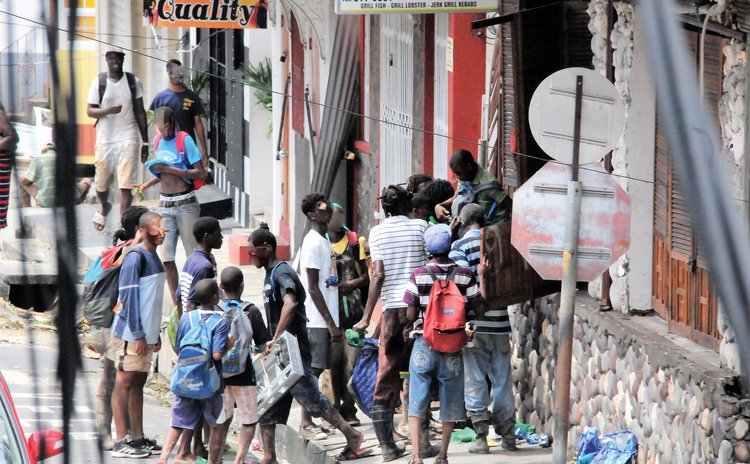 An infuriated private sector, mercilessly looted after Hurricane Maria in September 2017, says it will have to take severe measures to protect its property as Dominica prepares for another hurricane season.

"You loot, we shoot," is a slogan a member of the business sector recommended to deter potential looters.

It was a meeting attended by less than fifty business men and women organised by the Dominica Business Forum (DBF) and held at the Flamboyant Hotel in Roseau.

As the business sector prepares for another hurricane season that officially opens on 1st June, the business owners lament the fact that their businesses could be plundered again by a swarm of looters.

"The hurricane season is at hand and it does not look good," said Severin McKenzie, the DBF president. "We don't need a category five storm to cause mayhem given all our vulnerabilities."

During the meeting the DBF reiterated a call for an enquiry into the breakdown of security that led to the wanton looting of business places, even those not destroyed by the wind and the rain of Maria.

The DBF meeting again asked government to set up an enquiry to find the answers or if a report already exists to make it available to the DBF.

"How can we know to do to protect against another storm when we don't know what went wrong," a business man said.

McKenzie said that with a force of about 500 men and women the police force may not be able to adequately protect businesses in Roseau and elsewhere.

"The police force cannot approach the new hurricane season without some fundamental changes," McKenzie said adding that the police force too recognizes its limitations and have made recommendation for change that is now before the Cabinet of Prime Minister Roosevelt Skerrit.

"We cannot depend on the police," the DBF concluded. "We will to do everything to protect our business."

That may including hiring special armed security officers who should have the legal authority to shoot lawbreakers but at the same time the meeting recognized the fact that the law does not now permit the arming of non- police officers.

The DBF meeting suggested that Government should impose a state of emergency as soon as a storm approaches the island to reduce the level of lawlessness.

Obviously frustrated that that the government is not taking it seriously, some members of the private sector suggested that government may have concluded that since it has access to large quantities of other ready forms of revenue, the minister of finance is signaling that he does not need taxes from the private sector.