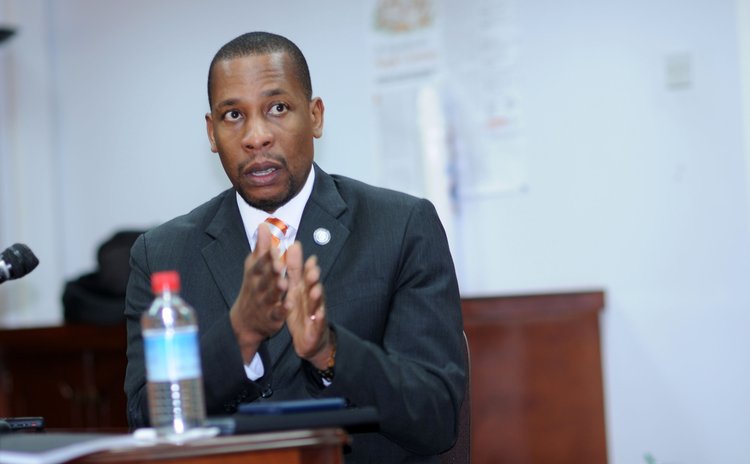 The late Sir K. Dwight Venner, former Governor of the Eastern Caribbean Central Bank had very large shoes, a presence that successfully directed monetary policy in the region for 28 years.

And Timothy N.J. Antoine, the man who replaced Sir Dwight is currently trying to fill those shoes. It will take some time.

Antoine, a Grenadian, became the third ECCB governor about a year ago, on 1 February 2016.

Last week he visited Dominica and spoke to government officials, leaders of the private sector, the parliamentary opposition and the press.

At the press conference, Antoine providing an overview of the economies of the Eastern Caribbean in general, and Dominica's in particular, and the ECCB's role in maintaining economic and fiancial stability in the sub region.

As the new ECCB governor, Antione was clearly satisfied that Sir Dwight had handed over the oars of a steady ship-a strong Eastern Caribbean dollar.

"We have to be thankful for what we have in the ECCU and we have to make every effort to preserve that," he said. "Our currency is strong, quite strong."

Antoine said the EC dollar had a 97.1 % backing, meaning "for every dollar in circulation in the Eastern Caribbean Currency Union we have 97 cents in currency reserves."

But the Economic Union has some challenges that includes the fact that indigenous bank struggling under the burden of non-performing loans. At the end of 2016, banks in the Eastern Caribbean had 17% bad loans. Dominica's bad-loans figure was 15.4 percent.

"The problem is the international benchmark is five percent," Antoine said. "We really should not have bad loans in excess of five percent."

To reduce the effect of bad loans on bank's willingness to offer loans, the ECCB has recommended the establishment of the Eastern Caribbean Asset Management Corporation, an organization that will essentially buy bad loans from banks.

In addition, the ECCB is trying to influence indigenous banks in the region to merge, just like Credit Unions in Dominica have come together to form the National Cooperative Credit Union.

On the issue of the controversial Citizenship by Investment programme (operating in Antigua, Dominica, St. Lucia, Grenada and St. Kitts and Nevis) Antione said the ECCB has advised the governments of these islands to be transparent and to use the revenue from these CBI programmes wisely.

"None of us knows how long the CBI will last; we hope it will last for a really long time but we really don't know," said Antoine. "So we say be prudent by not using the money for recurrent expenditure. Don't use it to pay wages and salaries, don't use it to pay the light bill."

Especially, in Dominica's case, the CBI has now emerged as the country's major income earner.

But economic growth in the region is weak. Antoine said that in 2015 only two countries came near the target of five percent economic growth. Grenada (5.2%) and St. Kitts and Nevis (4.9 %).

In Dominica's case, in 2015 the economy contracted by 2.5 percent because of Tropical Storm Erika.

"That's the power of a natural disaster," Antoine said.

To recover to pre-Erika levels, Dominica's economy will take two to three years. And according to the International Monetary Fund (IMF), that projected growth in 2016 and 2017 is based on the level of grants Dominica received after the August 2015 storm.