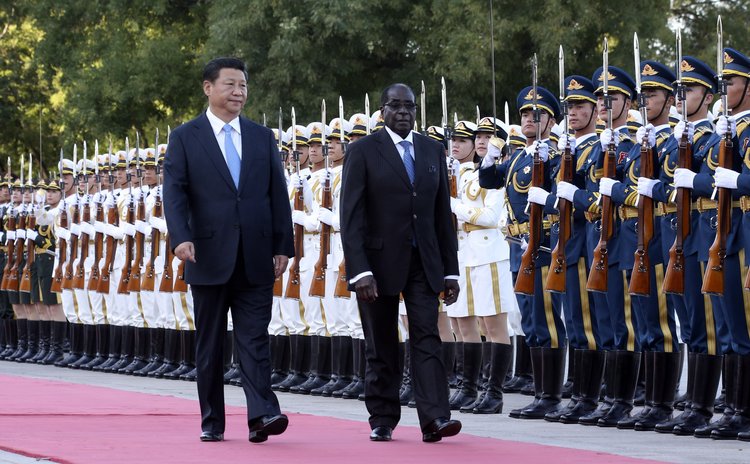 The pledge came out of the talks between Chinese President Xi Jinping and Mugabe in the Great Hall of the People.

Calling Mugabe an old friend of China, a renowned leader of Africa's national liberation movement and promoter of Africa's integration, Xi said the traditional friendship between both countries was forged during the two countries' anti-imperialism, anti-colonialism and anti-hegemony wars.

Since the establishment of diplomatic ties 34 years ago, the two countries understood and supported each other on issues regarding each other's core interests and major concern, and helped one another in their development, Xi said.

He said China will continue to adhere to its principles, uphold justice and support Zimbabwe's efforts to safeguard national sovereignty, security and development interests.

"We believe the Zimbabwean people have wisdom and capabilities to handle their affairs very well," Xi added.

China will continue to help train Zimbabwean talents, teach and transfer agricultural technologies to Zimbabwe and help the country to increase food production and agricultural income, he said.

Xi also expressed willingness to participate in Zimbabwe's construction of economic and industrial zones, and vowed to encourage more Chinese companies to invest in the country.

As Zimbabwe will hold rotating presidency of the African Union next year, Xi vowed joint efforts with the country to push China-Africa strategic partnership up to a new stage.

Mugabe, who is on a state visit as Xi's guest, expressed appreciation for China's support and help during his country's anti-colonialism war and struggle for national liberation and independence.

He praised China's fairness in global affairs, as well as its respect and help for African countries.

Zimbabwe is committed to speeding up its economic development, said the 90-year-old, expressing his hope to strengthen cooperation with China and boost Africa-China ties.

After their talks, the two presidents witnessed the signing of several cooperation deals in such areas as food, finance and tourism.