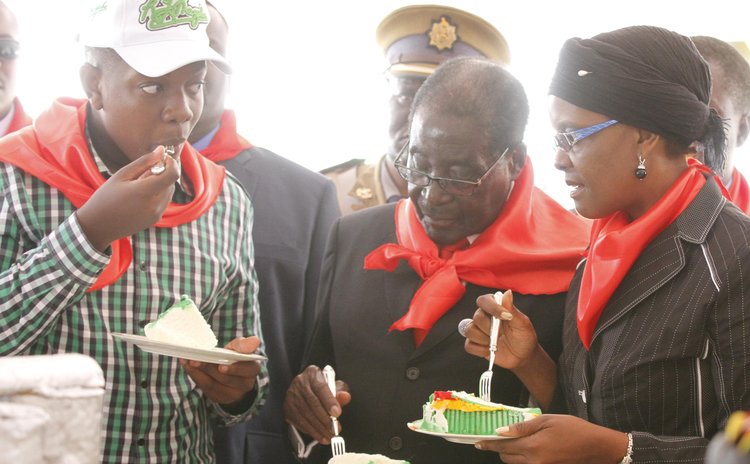 MARONDERA, Feb. 24 (Xinhua) -- Zimbabwe's President Robert Mugabe (C) eats a piece of cake with his wife Grace Mugabe and their son during celebrations to mark his 90th birthday at Marondera, 75 km f

MARONDERA, Zimbabwe, Feb. 23 (Xinhua/Sun) -- Zimbabwe's veteran President Robert Mugabe on Sunday celebrated his 90th birthday with tens of thousands of Zimbabweans, a milestone that no other founding fathers of African nations has achieved in office.

One of Africa's most prominent anti-apartheid fighter Mugabe has been the leader of Zimbabwe since independence from Britain in 1980, and having ruled 34 years, he is Africa's oldest leader and one of the continent's longest reign president.

"I feel as youthful and energetic as a boy of nine. I drop the zero now," Mugabe said, triggering a round of applause from Zimbabweans who gathered at the open ground of a stadium in Marondera, 75 km southeast of the national capital Harare.

He said leading a healthy life devoid of smoking and beer drinking had greatly helped him to live this far.

As in past years, Mugabe threw balloons and cut the colourful and gigantic birthday cake with his family -- wife Grace Mugabe and their children -- while entertainers danced and sang throughout the day. The event was organized by the ruling Zanu-PF party with estimated cost of 1 million U.S. dollars.

But this year suspicion around the nonagenarian leader's health was aroused as he only returned to Zimbabwe on Saturday, a day after his actual birthday on Feb. 21. Officials said Mugabe had traveled to Singapore to have cataract removed from his left eye.

On Sunday, Mugabe displaced no visible signs of illness and delivered his signature firebrand speech for over an hour.

He took aims at the opposition party, the West that imposed sanctions on the country, withdrawing most of the official aid since the turn of the century.

"The British -- we don't hate you, we only love our country. We love our freedom," Mugabe said.

"It is said Tsvangirai himself told the youths to beat the leaders. We cannot have a party of that nature coming into government, even allowing them to dominate possession of parliament seats in our urban areas," Mugabe told the congregants, many of whom were school children. "You don't raise your hand to hit your senior, never ever. You may quarrel but the best you can do is to go and complain if your senior is wronging you."

Mugabe also thanked leaders of China and Russia, who sent congratulations through respective embassies, for their best wishes, noting that ties with the two countries date back to the liberation struggle.

"I thank you for the best wishes and for assuring me that the friendship between China and Zimbabwe will be sustained for all times," he said of Chinese President Xi Jinping.

Born in a village about 80 km west of Salisbury, present day Harare, Mugabe grew up basically under the watch of her mom.

A teacher himself and holding the most college degrees among his peers, Mugabe was most accredited for ushering in a bright decade for black Zimbabweans in his first decade's rule, sustaining the growth of white-dominated farming sector, pushing for universal health-care, education, and social services, and successfully keeping his critics at bay.

Mugabe also consolidated his support base in the country's vast rural areas by determinedly pushing forward the land re- distribution program, which he says is to correct the wrongs done by imperialists.

Mugabe was once considered, even by the West, as Africa's success story but the glow began to fade when Nelson Mandela rose to power after 27 years of incarceration.

Even Mandela once jokingly said about Mugabe: "He was the star and then the sun came out."

But the real threats to Mugabe's rule only emerged after 1997. Weakening economic growth, galloping inflation, and freezing of British funds to compensate land programs came in toes.

A "fast-track" land re-distribution program, or more commonly known as compulsory land seizure, drew the irk from Western countries. They began to accuse Mugabe of human rights violations. And after the West alleged Mugabe rig 2002 elections, Mugabe and his senior party officials were slapped with travel bans and overseas asset freeze. Generous official aid from the West during the first two decades, amounted to 200 million U.S. dollars a year, was withdrawn.

During the 2000s, the country's economy was in free-fall. On the political front, Tsvangirai was close to unseat Mugabe in 2002 and 2008 elections. The two political rivals were forced into a four-year-old coalition government after the 2008 election.

But as economy recovered, Mugabe also led the revolutionary Zanu-PF party back on its feet, defeating Tsvangirai and his MDC-T party by wide margins in the presidential and parliamentary elections last July. Mugabe's new five-year term will end in 2018 when he turns 94.

A new constitution that was passed in 2013 allows a president to serve only two five-year terms but the term limit does not apply retrospectively.

In an interview with state broadcaster ZBC prior to his 90th birthday, Mugabe said he is yet to retire and criticized party leaders fanning factionalism, threatening to expel them if they continued with the bad practice.

"Why should it (succession) be discussed when it is not due? Is it due?," Mugabe said. "The leadership still exists that runs the country. In other words I am still there."

Vice President Joyce Mujuru, 58, and Justice Minister Emmerson Mnangagwa, 67, have been widely reported to be the two faction leaders. Both have been in Mugabe's cabinet since the 1980s. They have repeatedly denied leading factions.

"When the day comes and I retire, yes, sure, the day will come, but I do not want to leave my party in tatters. I want to leave it intact," Mugabe said.