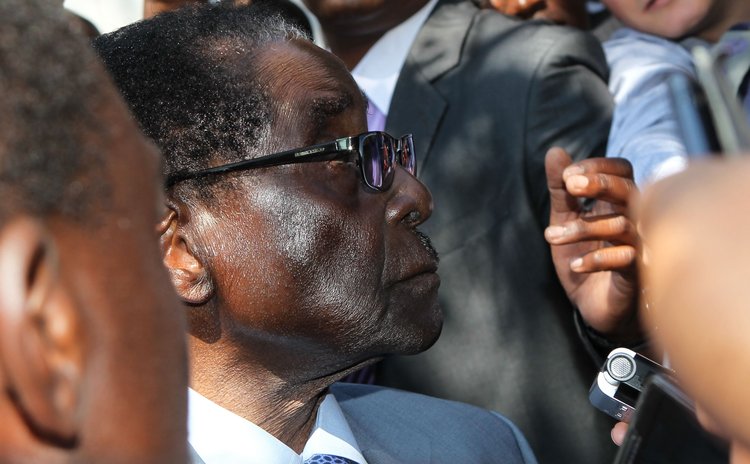 The "royal throne", as Zimbabwe Broadcasting Corporation report terms it, was presented to Mugabe at an exclusive party organized by his staff in the State House Saturday when the nonagenarian leader returned from Singapore after successfully having cataract removed from his left eye earlier this week.

The throne, named Simbahwe in local Shona language, is carved in stone and coated in gold, diamonds and several animal skins. It took three local artists two years to make and they gave it to the President's Office for free, the Herald newspaper quoted Chief Secretary to the Office of the President Misheck Sibanda as saying.

Photos of Mugabe sitting on the throne, covered with noticeable leopard and crocodile skins, lion furs, and two huge claws, were splashed on the state media.

One of Africa's most prominent anti-apartheid fighter, Mugabe has been the leader of Zimbabwe since independence from Britain in 1980, and having ruled 34 years, he is Africa's oldest leader and one of the continent's longest reign president.

In an interview a month ahead his 90th birthday, Mugabe said his longevity is "grace of God."

". . . 90 is just a number. To me it's 90 years of experience, both negative and positive," Mugabe touched only briefly on the issue during Saturday's office party.

A leaked U.S. cable in 2008 alleges that Mugabe was suffering from prostrate cancer, a claim being denied by the Zimbabwean officials. On record, the president says he only has minor eye ailment.

On eve of his birthday, Mugabe hinted that he will not retire until his latest term in office ends in 2018. He also blocked the talk of successors within his Zanu-PF party amid wild speculations that fight between the two most possible successors, Vice President Joyce Mujuru and Justice Minister Emmerson Mnangagwa, has intensified in recent weeks.

Both politicians, who have been in Mugabe's cabinet since the 1980s, denied leading fractions to compete for the top post