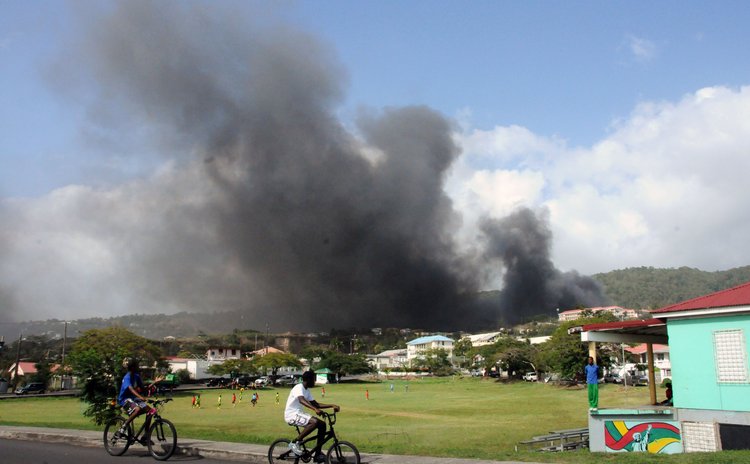 Noxious smoke rose way up into the sky, like a huge dark blanket, almost causing night at mid-afternoon in Goodwill today.

It seemed as if everyone in the area was barbecuing some type of foul-smelling meat; the smoke was on people's lips, in their eyes, on their lungs.

Apparently a large fire of garbage and tires and toxic materials was burning at the landfill at Fond Cole.

Fire Chief Josiah Dupuis advised residents to "shut your homes" to keep out the fumes. He said he was "very, very concerned" as firefighters battle a fire that could blaze indefinitely spewing dangerous fumes in the air.

President of the nearby Dominica State College Dr. Donald Peters said on DBS News this evening that he was forced to send students home because they complained of burning eyes and noses.

Unfortunately, today a cruise ship was at the usually tranquil Woodbridge Bay Port but this afternoon the port and the ship and the sea were enshrouded in dark smoke.

"It's affecting us from the standpoint of the Port," said Benoit Bardouille, the Chief Executive Officer of the Dominica Port Authority stating the obvious. "I hope we are able to bring the fire under control".

Bardouille said most of the cruise passengers were on tours around the island but the smoke will affect them when they returned. Fires are accidents, he said.