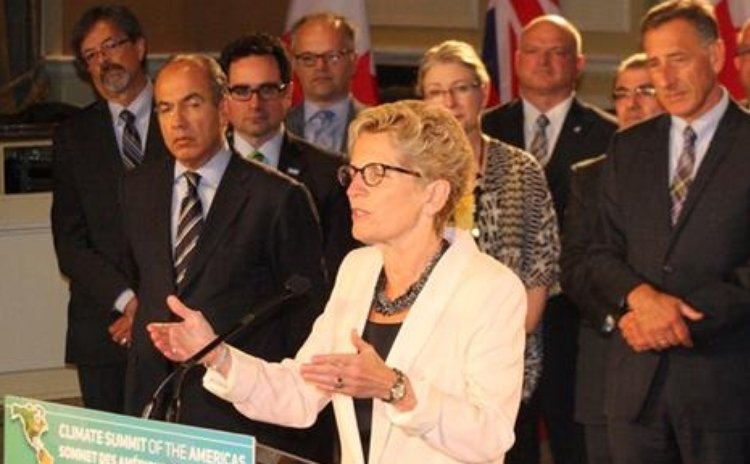 TORONTO, Ontario -- A climate action statement that will address the continued warming of the earth's atmosphere was signed by 23 governments, including Ontario, Quebec, and California at the Climate Change Summit of the Americas in Toronto last weekend. The main objective is to meet a target two-degrees Celsius warming limit in global mean temperature by "the second half of the century".

While greenhouse gas emissions are continuing to quicken climate change, California Governor Jerry Brown, Ontario Premier Kathleen Wynne and Quebec Premier Philippe Couillard made their respective cases for climate change and the environment at the summit.

"We have 1,100 companies in Ontario that are dependent on Alberta's oil industry," said Wynne. "To pretend that we don't have a shared interest and we don't have to find a way to move that fuel in one way or another would be to hide our head in the sand."

"Oil still has to move in this country, and if it's not going to move by pipeline it's going to move by train or by truck," said Couillard. "I'd rather have a safer alternative (and) incorporate the costs of climate; this is why cap and trade is so useful."

When questions were put forward to contemplate shutting down the mining of tar sands and stopping pipelines as a means of alleviating climate change, Wynne said, "If we antagonize the very people we have to work with then we are not going to have success."

Moreover, experts further warn that a two-degree target may be insufficient to prevent apocalyptic floods and forest fires brought about by climate change.

California Governor Jerry Brown said, "We can't wait for propaganda from certain oil companies or conservative parties that don't want to do anything … the stakes couldn't be higher and the hour is very late… we may have past a tipping point, we can't predict with any degree of certainty where we are now headed based on the carbon that is there."