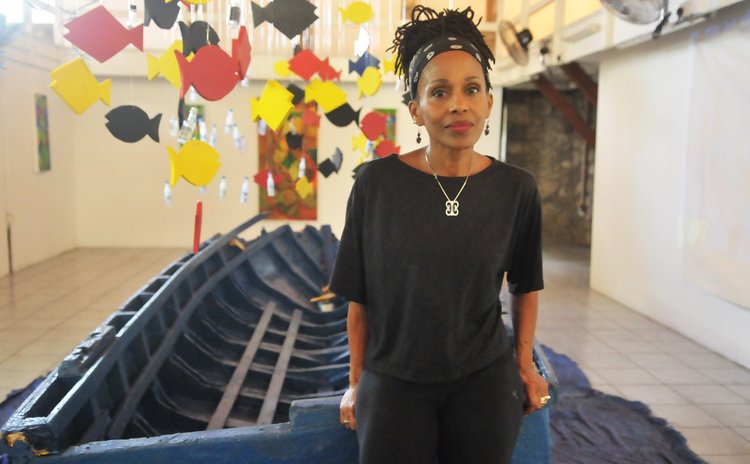 So many are the metaphors, innuendos that could be captured by the latest art exhibition showcased two weeks ago at the Old Mill Cultural Centre staged by Dominica's premier female artist, Carla Armour.

It is important first of all to understand Carla's background as a student of art from her early days when as a student she obtained an associate's degree in art. In a recent exclusive interview I conducted with her, she said that she grew up in a home where conservation and love for the environment was instilled at a very early age. Hence it is not surprising that Carla who has an eye for beauty and has a passion for well -being performed duties as a chaperone, organizer and presenter in quite a few beauty pageants in her life. A few years ago it was the Bahamas based MMTS -a talent search for singers, actors and models from the region and, of course, she helped train, mentor and chaperone her niece Queen Leslassa Armour Shillingford who became only the third Dominican to enter a Miss World Pageant.

On her canvas of life, Carla also was an executive member of the Dominica Writer's Guild for which she provided a space for expression in the 80's at her aunt's Iris Dangleben's Gallery. She facilitated the sale of the works of many rural artisans in craft, leather, painting, literary art, cuisine, carvings and the list goes on. She was president and secretary of the Dominica Hotel and Tourism Association and founded SHAPE to preserve the architectural integrity and landscape in Roseau.

Now based in London and still heavily involved in her art and her search for balance of mind and body in betwixt her daily fitness runs, she was able to launch her first one-man exhibit at the Old Mill on the heels of the anniversary of Hurricane David, even while killer Dorian ravaged the Bahamas.

Symbolically and somewhat ironically, the " Still Waters" exhibit opened its doors with a battered , tattered boat with a huge chunk of its left stern missing while above fish of red ,green, yellow, black all colors of our flag are held suspended by clear, barely visible nylon, minute bottles conveys an impression of rain drops

Inside the boat is a tin of paint, with a paint brush resting on the cover, while all round bottles of plastic strewn all around disturbs a rather orderly or structured setting. The front of the boat faces a portrait of the Carib Zemis god while the spiritual equivalent of Africa looks on from the back.

This was what greeted the eye as one entered the Mill where an exuberant Carla stands ready to help on-lookers unravel the canopy of contradictions and metaphors which abound. There was a lot to be said and the few who were present at the time I visited ventured and conveyed images that were probably not originally intended. But isn't this not what fine art and its mastery all about?

Pentecostals speak in a tongue that has meaning only to them and in much the same way an artist uses various media to speak their own tongues, a language of their own.

The beauty of such creativity as "Still Waters" is when an abstract piece comes alive and speaks in a personal way to all who lay eyes upon it. Notwithstanding the strong underlying message of preservation and protection of our environment and certainly of our independence so as to be no puppets of no one regardless of assistance given was clear in the nylon strings- control of destiny by whom? By what? The colors of the flag, our Kalinago and African ancestry and yet protection from the gods all evoke thought and serious introspection. The paint brush and tin to me suggest an incomplete job or perhaps we have merely covered the wounds of division and pain which are ever so deep- a deep gash within the canoe in blue. Well may be I am reading too much into it and my imagination is a spiral as the twisted galvanized chippings which form part of the décor.

Still I suspect, "Still waters" may suggest a calm after a storm, but judging from the evidence of destruction portrayed by Carla Armour's exhibition, it could be an oxymoron, satirically giving life to the lifelong adage, "still waters runs deep".