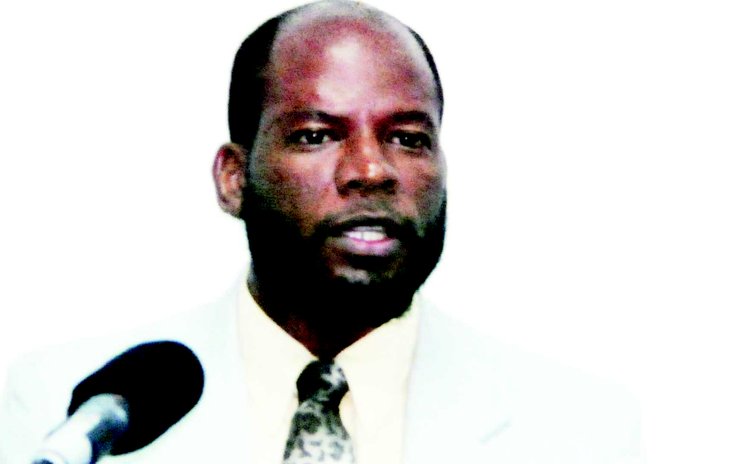 It has become a slang of some sorts that when you ask persons whom you meet on the street how are they the response is "I'm blessed". If you even ask someone who was incarcerated for serious crimes such an answer would not be surprising.

Well, I would think that this is an abuse of how blessing are bestowed, and I would hasten to say that really grace and mercy are being extended to us, and when we so accept, we will, eventually, be blessed.

One of the way this blessing is given is when "God has broken the power of the enemy" over us, or to make it more personal, over you. Well, that was the assurance Jerry Lloyd gave us at last weekend when he again performed on a Dominican stage after some 7 years.

And what a dynamic performance it was! He posed the question to all and sundry: "Who said you couldn't do it right" with the help of God. Jerry used his performance to minister and relate incidences in his life where he was begrudged and judged for mistakes but, according to him, rose up an triumphed despite the odds to serve a living and true God.

The New Day Fellowship band consisted of a youthful quartet complimented by a trio of harmonising exquisitely attire females exuded professionalism not often seen in a Dominican outfit. But such is the detail precision that Jerry's concert's or performances are renowned for, as a consummate gospel entertainer, with a captivating, haunting vocal and song-writing ability.

He called on patrons at the Old Mill picturesque backdrop to forgive and don't hold on to the past the same way we pray the Our Father "and ask the Lord to forgive us as we forgive those who trespass against us". "Lemme go" his version in song –a mega hit some two decades or so ago, sounded as current as ever as Christians and persons of secular standing warmed to the spicy rendition. Then before we knew it another " Yo passa tchew mwen" and the Mill began to turn, crushing Satan, the enemy, taking us out from our comfort zones. Jerry was real and forthright as he challenged Christians who relax in their comfort zone thinking they are saved and everything is alright. Lloyd recommended "Heat in de comfort zone," a stimulus to get up and don't rest on our so- called laurels and do the Lord's work and win souls for his army.

Easily Dominica's most professional entertainer secular or religious, Jerry Lloyd, the uncle of Black Diamond and brother of Joey "Explosion" Lloyd, took time off to encourage, by way of testimony and song, that"You can do anything" and to warn that we should differentiate and acknowledge, as children of God, the importance of timing and patience in the things we do, as good intentions can yield bad results if one is not careful. He illustrated this using a number of anecdotes emphasised by musical precise notations and rests, with the obviously well-rehearsed musicians and background vocal trio.

Latest tracks such as "God's Favour" my chosen theme for the concert, had everyone singing. As Jerry noted this was what has preserved him and kept him so young and sprightly on stage despite his brushes with 'death.'

It was interesting to note that though the musicians were very youthful and did not have the usual experience required for such an artist who has made his mark regionally, Jerry was able to drill them and they responded and provided solid musical backing and so must be complimented. It occurred to me that when one has reached such a level he can venture to go solo as Jerry obviously has for many years. This move is made when you become the brand as Jeff Joseph did in Grammax.

However, those who seek God's favour first, as Jerry has confessed (having been called out of calypso ), will be directed in due course.

Indeed, what an inspirational night