A review of "I am the Boss", NDT's new theatrical production 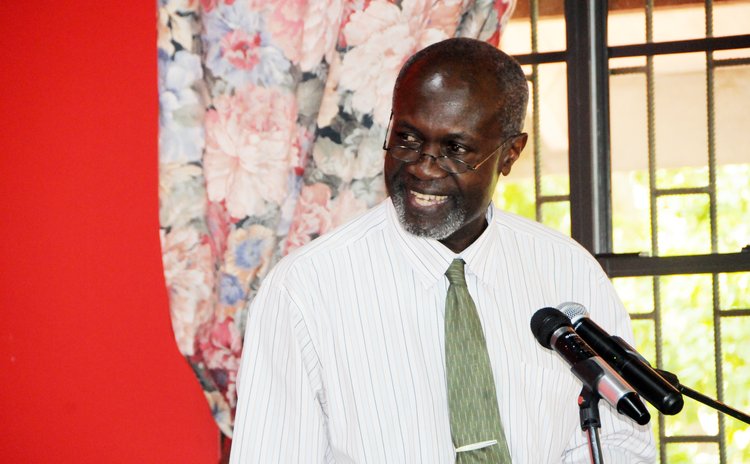 It's over four decades now and thoughts written by Steve Hyacinth have been transferred to stage by the Methodist Youth Group, Goodwill School Drama Club and for decades now with Dominica's premier theatre group the New Dimensions.

Two weekends ago was no exception when NDT stormed the stage with "I am the boss", one of their better productions in recent times. I say so not because the setting chosen moved away from the traditional family-village-community setting which has dominated past productions, but because of the refreshing issues addressed and the perspectives that were brought to bear from a socio-political view-point.

The writer seemed more than ever to shed all timidity in tackling head-on issues at the workplace such as lateness, cheating when signing in, faking of illness, "pongin beff", taking time off for facial making up, leaving the workplace to run personal errands, poor telephone ethics and a host of other questionable working habits which plague the public service in particular.

Of course the writer/director, now a retired public servant, is in the best position and has taken the unfettered liberty through his writing to say what we all know is true but is not always politically correct to say for fear of reprisals. Many of these negative attributes came to life in the star discovery in youthful Iyka Dorival who played Mary Foster, the spice of the production who played a Donille-Blackmore- type role to perfection as a trouble-making and overly inquisitive cleaner in the offices of the business concern run by the domineering, often ridiculous boss, veteran actor Jerry 'Mr Parker Ben' Coipel.

The injection and subtle use of terms such as 'imputing improper motives', 'deplorable', 'drug testing' 'consultancy' and large sums of money to be 'paid in coins' all were alluded – satirically pointed to the Dominican political landscape.

Miss Dora Dukes, the 'Bible quoting clerk', who cried for almost any challenge she faced at the workplace, ably played by Nawana Shillingford, presented quite an opposite personality to Mary Foster, the cleaner who refused to do the work of the consistently late telephone receptionist, the beautiful and sexy Creola Africa, charmingly executed by Narrissa Brown. Her elevation from the downstairs to upstairs, possible at the visual delight for the "Boss."

Meanwhile, human resource manager for the enterprise Clara Okey – Meritta Hyacinth, tried to bring order and quell many of the heated exchanged between Aldia Titre who played Shake Hunte, the security officer on duty. Shake was viewed as a snitch for despised manager Parker Ben, not just by the cleaner but by the aging truck driver Jango Gibbs executed by senior actor Lloyd Benjamin.

The latter complained that the truck had served its time due to the numerous breakdowns and that as one on the ground it was his view that the customers would rather the company's product be distributed earlier. His appeals fell on death ears and he blamed the HR, rechristening her as Karoke as opposed to Miss Okey, suggesting the change was in order, as she sang Mr. Parker Ben's tune and never represented the interest of the workers or the company for that matter.

Of course these sentiments were expressed by the fearless, aggressive and partially intoxicated trucker, but it only aggravated the Boss who threatened his employment and anyone who dared to oppose or go against his directives, even if it was revealed that his decisions was costing the company over 250% loss in sales.

No one understood why Mr. Ben had adopted this "I am the Boss" posture; not the cleaner who revealed she once taught him the difference between debit and credit, not even newly installed accountant Daryl Titre who debut as Trevor Benice. He seemed professionally at home on the stage and in the business but not before "The Boss" warned him not to extend his "Be Nice" surname to his work-place.

Rumors of him deviously taking charge of the company which was willed by previous owner Mr. Pope to his sons was piloted by the aggrieved trucker (who was once commanded not to leave the broken down truck with the goods in the country while en route to do deliveries), began to circulate. Adverse to his name, Ben, he never 'bent' to any reason except….

Yes, it was the widowed Mrs. Dixon played by Andra Nanton who brought a smile to his face which translated to office activity. Obviously, it was suggested that she had other motives seeing that "the flowers were still fresh on her husband's grave."

The joy shared by the office when the cleaner passed CXC subjects short lived as an inevitable confrontation with the "Boss" ensued both physically and verbally, as to his ownership status of the business concerned, and all hell broke loose. Exhilarating and refreshing!