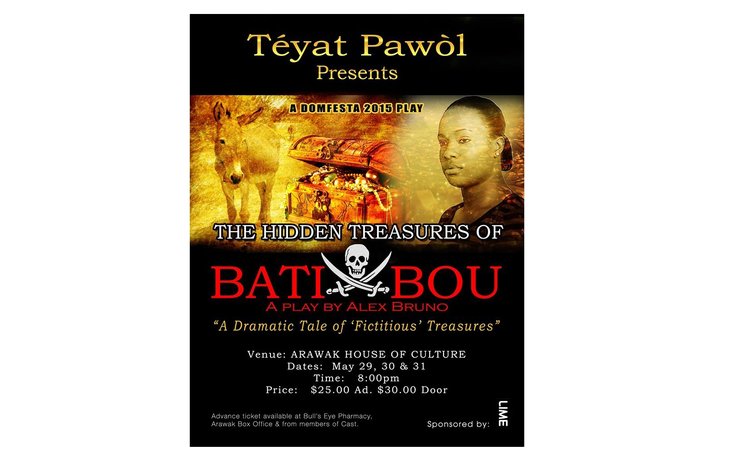 Poster of Treasures of Bat Bou, aplay by Alex Bruno
By Ian Jackson

Play number 19 and their 10th DOMFESTA theatrical production is indicative that Teyat Pawol has some experience behind it and is now an integral part of the performing arts landscape in Dominica.

One thing I must say, the advertising of this production really lured people that they had to "go see this one" and the writer/ director Alex Bruno is skilled at this. Somehow as a diehard fan of theatre I told myself there must be a twist to this story since piracy and treasure as advertised did not seem feasible, in the real sense of the words, at the Arawak House of Culture.

The play greeted patrons with a well-designed set by the artist Ras Algie who has been with the group from its inception. Two of the senior and better actresses, Rashida Gachette (Zazye) and Marja" Lady Star" Jeffers (Damai) rightfully became the hub on which the story spun. But it was the passionate first timer Ignatoos (played by Rachel Jno Baptiste) who stole the audience's heart on the second night.

As in most Caribbean productions there is always a "beff" and "tory" spun by some colourful character around which rumour and mayhem revolves. Rachel was well-chosen for the part as her intonation and plus-size figure provided all the trimmings of that sort of trouble-making character, a character that Bruno used effectively to ward off early suspicion or guilt from a shopkeeper, the scheming Zazye and confidant Prezi, my actor/ actress of the night.

The latter was so convincing in her role as a man of science-obeah and trickery, that one or two persons in the audience who were seated behind me retorted after the play "I tell you it was a girl". Well, as one who studied theatre arts, I knew the level of difficulty and skill that is required in such situations when one has to keep not just in character, but to speak in the husky tones and maintain the gait of the opposite sex. Immanuel Andrew did it well.

The story of this hidden treasure was dramatically narrated by the Sea-whisperers -Lovely Williams, Immanuel's daughter and Primrose David as they took turns darting in and out of windows, doors and even the stage entrances to weave their tale of mystery and magic. A donkey, it was said, was one whose spirit roamed restlessly for the past 100 years and kept watch over the treasure buried somewhere within the vicinity of the residence of Damai Yevetlyn her daughter (played by Kerdisha St Louis) and the husband of Zazye, the shopkeeper who co-habited with them.

Already the conflict was set as the rumours were amplified by Ignatoos and even her own brother Thomson (Shannon John) who doubled at times as priest Father Batty. Bim Bim (Cornel Charles) who seem to have a crush on Yevetlyn was said to be the estranged son of Coco Fe (Daniel Colmore).

The colourful expressive words as Bim Bim poured out his heart and Damai's own skill with words amidst her use of her skirt to fan an ever present heat on her person, added some level of comic relief from time to time.

The use of the 'tensil' and its contents, between conversations was another scene which temporarily doused the flames as Ignatoos continued to visualize a donkey and a tall, tall man that would just disappeared "poof" to the delight of the disbelieving, provocative Coco Fe and patrons of course.

There were other light-hearted moments too, with Father Batty who seem to have been almost on the verge of having a drink at a bar, run by the plotting Zazye. It was a private conversation in the church with the Father and Prezi, which seem to have unnerved Zazye and hence her plan to poison Prezi who planned to frighten the community off the property and leave the land to them, demanded too much and could no longer be trusted with her secret ills.

As the saying goes, there is no honour between crooks and so a fatal glass meant for Prezi was what took the priest to his grave. The haunting mystery of the treasure came to prominence from a hidden book as Zazye met her fate.

Greed and evil was what this play was all about and the ship and the pirate story of buried treasure were just metaphors to bring the story to light. Creatively done. In my opinion, Alex Bruno has presented better fast moving and interesting drama pieces but his artistic skill and command of such technicalities were evident to the trained or experienced eyes. For instance when he juxtaposed dialogues, the effective use of the freeze and lights were well-executed and the sound effects all added appropriately to the mood and heightened the suspense.

Alex, now a philosophy major with a minor in theatre arts at an American university did exhibit some growth in his stage direction, but was the story line the strongest and did the actors do it justice? The audience and time will judged.