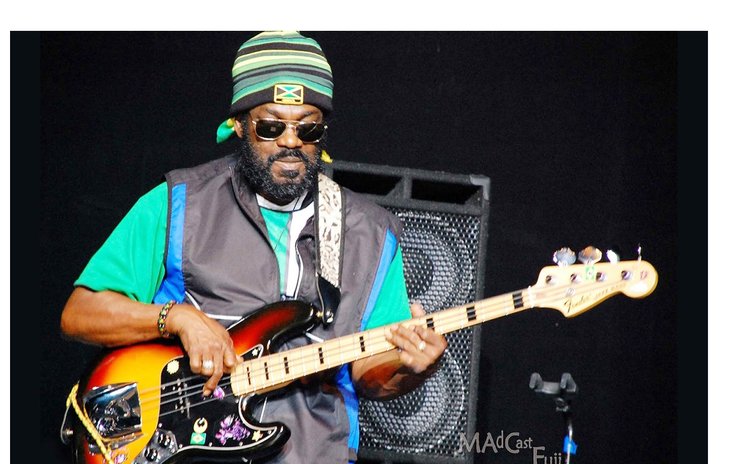 As a young man I was simply intrigued with signature bass-lines in Arrow's "Hot Hot Hot" ; Bob Marley's " Stir it up" ; Explainer's "Lorraine"; Sugar "Bum Bum" of Kitchener and later Steel Pulse's " Rally Round the Red, Gold, Black and Green" or "Bodyguard" by Paul Simon. Even with our own Cadence music, Bill O Men's "Africa" was a must for every aspiring bassist.

What is unique with all these lines is their pulsating melodious sing-along which makes them memorable for years unending. The lines were very distinctive and had a flowing, unique pattern which served as drills for those who chose the bass guitar as their instrument of choice.

The names touted as the two most popular were my name-sake Jaco Pastorius, genius of the late 70's and early 80's, and Stanley Clarke. Later I began to admire the lines by the group "Earth Wind and Fire", John Entwistle of the rock group WHO and when I began playing in a band of my own, Burning Flames's bassist impressed, along with Dominica's Fred Nicholas, the elegance of Cleve "Hurricane" Jean Jacques, T- Pam of Grammax fame and my contemporary, Eddy Angol, for their impressive and pulsating lines.

A magazine of the century will list Victor Wooten in the all-time list and more often than not, the best of this era. He is one I have begun to follow and admire for his technique in plucking and slapping the guitar to provide an aggressive funky feel. Wooten is like poetry in motion and what's more he is the only Black bassist revered to be in the top 10 in the world. Black bassist matter.

This was rather a stage revelation to me as I know that the groove of a White bassist just can't compare to a Black bassist pulling those strings. Many times we see leading White bands presenting a Black bassist such as "Earth Wind and Fire", "UB40" or Boy George's "Culture Club" notwithstanding other acclaimed bassist as the "Beatles" Paul McCartney, Sting of the group "Police" or the man Flea of the "Hot Chile Peppers".

However, an unsung hero and to my mind one of the greatest bassist eve, is Ashton Barrett, bassist for Bob Marley. In fact his Shakespeare became world famous, more popular than him. I guess that Ashton grew up in an era of the 70's, when Reggae was trying to make a name, he was also obviously over- shadowed, as just background supporting act for the star, Bob Marley. Ashton "Family Man" Barrett unfortunately became more famous, or infamous, for fathering over 50 children, some 20 of these during the time he played with the "Wailers", hence the nickname "Family Man".

He formed the other side of the rhythm twins in Marley's band with his brother, drummer Carlton Barrett, and was responsible for the deadly captivating, pulsating sound of Bob. Ashton was also the main arranger as he was a fairly competent keyboardist.

"Stir it Up", "Is This Love", "Get Up Stand Up", "Waiting in Vain", "Buffalo Soldier", "I Shot the Sheriff", "Satisfy my Soul", "Could You be Loved"- all from the acclaimed "Legend" album. Also, "Waiting in Vain", "Natural Mystic", "Guiltiness", "Jamming", "One Love", "Three Little Birds", "Turn the Light Down Low" and "Exodus"- all from the album of the same name, plus tracks from "Natty Dread" and the "Rasta man Vibration" albums-all have phenomenal haunting basslines.

Ashton Barrett's choice bass is the Fender Jazz and what's more, it's a four stringed bass, just as is the preference of the best bass players including world number one Victor Wooten. It is also local great Fred Nicholas' first choice as it is deemed more expressive and allows for a level of dexterity along the fret board notwithstanding the fad and commercialization of the 5, 6 and even 12 stringed bass.

Though overlooked by the "Rolling Stones" magazine whose focus seem to be technique, speed, slapping and plucking, more in keeping with rock and funk grooves, and sometimes jazzy riffs, but "Vintage Bass Player Magazine" acknowledged this master bassist with a lifetime achievement award for having created some of the most memorable basslines ever; not just for Marley but Peter Tosh, Burning Spear and tons of others.

To me, this 1946 Jamaica-born genius who was overshadowed by Bob Marley and ignominy of having fathered scores of children deserves the accolade of being one of the greatest bassist who ever walked the planet.