Jump Ball No. 48. By Arlington James 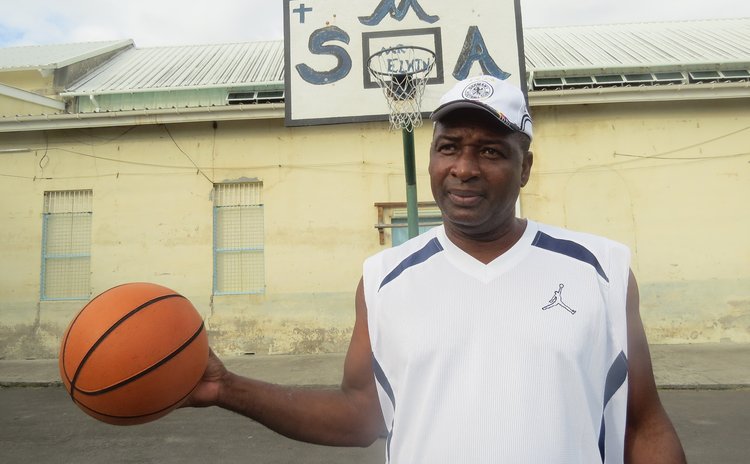 LENNOX JERVIER contributed to development of Dominica's basketball in 1980s and 1990s.

During the 1980s Lennox Xavier was one of the 'big names' in Dominica's basketball. A 6ft 3in Centre, this high-scorer and big-time rebounder was described in local newspapers as a "Dominica and CARICOM All-Star player".

On the basketball court, however, Lennox was known as 'Lenny' and 'Bobori' but in 1987 he set the records straight and let Dominica's basketball fraternity and the media know that his name was actually Lennox Jervier.

Lenny was introduced to the sport of basketball while attending Roseau Boys' School and he used to 'practice' on SMA's court with Sylvester 'Tata' Joseph, Fletcher Lancelot, Bro. French and others.

Lennox entered DABA's 'big league' playing with Harks, and remained with that Division I team from around 1979 until 1983. Lenny began making his mark in local basketball while with Harks where he was a regular high or top scorer. His teammates included George Andrew, Ashworth Daniel, Jeff Jeromy, Randolph Joseph, Emanuel Loblack, Vivian Lugay, Craig Nesty, Edgar Robinson, Dave Williams and others.

He recalled that in 1983 Harks were only one field-goal away from winning the League championship when his teammate, in attempting an unnecessary dunk in the final seconds of the game, was 'rejected' by the basket, causing them to lose the match and the championship.

One of Lenny's big scores with Harks in 1983 was 22 pts, against Eagles which he joined in 1984 and remained with until Eagles dissolved at the end of the 1987 season.

As noted above, Lenny was a productive player and in 1985, for example, he hit 36 points for Eagles vs Pros and hosed down Flames with a powerful 47 points. By the half-way mark of the 1985 League he was the League's leading scorer, having amassed 245 Pts. However, he recalls that his highest individual game-score ever was a whopping 62 points, versus Lions.

Lenny did some coaching while on Harks and upon joining Eagles he served as Player-Coach with Eagles I and Coach of Eagles Intermediate for the duration of their juniors' existence (1985, 1986).

He coached Eagles I to almost winning the 1984 League Championship which, unfortunately, was presented to another team; to another 2nd position, in the 1985 League; to win double League and Knock-out championships in 1986, and to capture the Knockout championship in 1987.

Meanwhile, under Jervier's direction Eagles Intermediates captured both League and Knockout championships in 1985, then repeated the feat in 1986.

Lenny, with a chuckle in his voice, related a situation while coaching Eagles II which had a massive lead over their opponents in a match. During the second half and with minutes on the clock he called subs for all 5 players and attempted to send in five female members of the Eagles Sports Club. This earned the team 5 Technical Fouls, the ladies had to return to their seats and the match continued after the opponents shot their 10 Free Throws for the 'Technicals'.

Apart from playing in the national league and representing Dominica Lenny also played in tournaments in Antigua, Guadeloupe and St. Kitts, versus Logan, and in a few editions of DABA's Off-Season League with Eagles I (1986/87) and Old Court (1987/88).

He also served on the Eagles Sports Club executive and occasionally assisted in repainting of the court before the opening of the basketball season.

In closing Lenny, now a contractor by profession disclosed that besides his love for the game, basketball changed his life because surprisingly he used to be a shy person. If you did not know, then now you know!