Besides manslaughter and other violence, all categories of crime in Dominica are on the rise. 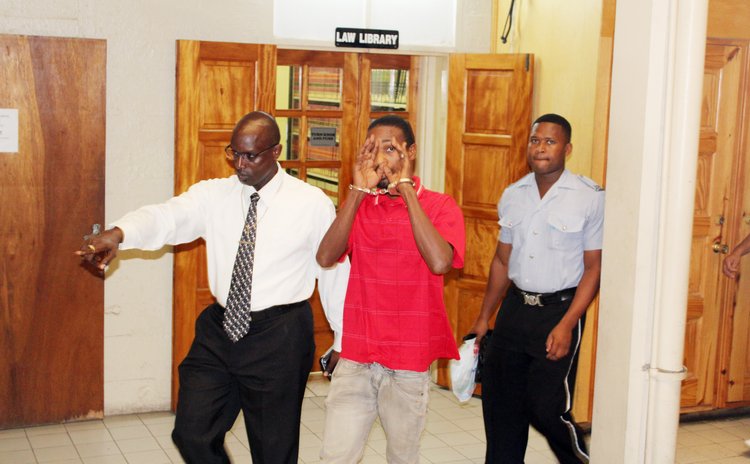 Vidal leaves court after he was charged with murder

The People's Party of Dominica (PPOD) is compelled to address the serious impact of crime on the well being of Dominica and Dominicans. Just last week, we were exposed to the news of the grisly murder of Valda Rose Laville in Loubiere. Valda succumbed due to multiple lacerations made to her body. According to a study conducted by the United Nations Office on Drugs and Crime (UNODC), Dominica yielded a 21.1 per 100,000 population murder rate in 2010. Dominica topped countries like Ukraine, Aruba, and even Syria and Lebanon in the murder rate per population for that year.

Besides manslaughter and other violence, all categories of crime in Dominica are on the rise. We are to ask ourselves, what are the factors lying behind the spate of crime plaguing Dominica? Are these factors complimentary to the "growing" pains process, or are they the result of societal, economic, and political decadence? Although we can list glaring attributes like high unemployment, a staggering economy, the proliferation of drugs, and the influence of media, it is not a black and white issue. These attributes are only pieces to the puzzle, the remainder being our morals, ethics, attitudes, and pride as Dominican citizens.

The national security desk of PPOD has identified unique patterns in regard to crime rates over the past two years in Dominica. We categorized crime according to the types which would have the most impact on the economy and on the psyche of the Dominican people. We chose in this study to ignore sex related crimes, because we are in the process of dedicating an entire research topic to it. Over the years 2015 and 2016, we found that certain areas of Dominica can be labelled as hotspots for drugs, violence, and serious theft/robbery. We looked at homicides, serious thefts/robberies, aggravated assaults, drug seizures (other than marijuana), firearm seizures, bodies found, people disappearances, and sudden deaths over the two year period. Our definition of serious theft/robbery includes theft of property and equipment worth over EC $1000. It would also include theft of a nature that would detrimentally impact tourism and business. It would not include theft of a pencil or small items of the like, although we have seen increases of such over the past two years. We define aggravated assaults as an attempt by one or more persons to inflict serious bodily harm on another/s, usually with a weapon.

According to our findings, there were ten reported and confirmed homicides, the same number for 2015 and 2016. It is of interest to note that February had the highest number of homicides per month in 2015 (three listed and confirmed). We can only speculate that it may have to do with out-of-control passions around the carnival time, but not enough data exists to confirm that. Out of the three February homicides, one incident of manslaughter occurred during Jou'Overt. In 2016 in correlation with the previous year's pattern, four homicides happened in the month of January. This may be indicative of two things: Number one, the consequences of post-seasonal (Christmas in December, Independence in November) depression moods; and number two, the result of individuals exhausting financial and economic resources on the previous year festive (Independence and Christmas) celebrations. While there were no homicide area-specific cases for 2015, findings indicated that Grandbay had an unusual level of reporting in 2016.

There were 12 cases of serious theft/robbery brought to the police in 2015. Two cases involved the armed robbery of visitors at the Syndicate Tourism centre, and two cases involved the robbery of a gas station in Castle Comfort. There were also two cases of Chinese businesses being robbed at Fond Cole. According to our analysis, robbery of business places in Dominica and on tourists is of a serial nature. Therefore, the police would be well advised to take the occurrence of first time incidences seriously, in order to prevent repeats. There was an 8% drop in reported serious theft/robbery incidences in 2016. However, the dollar value of assets stolen more than tripled, and the use of firearms in procuring stolen items increased over 100 percent. While in 2015 the majority of theft/robberies were disbursed almost equally across the island, the majority of thefts in 2016 happened in the southern half of Dominica. Last year (2016) had an interesting dimension, as three non-Dominican nationals (Chinese) were involved in the theft of local bank funds. These three acquired monies using non-conventional Dominican techniques. In our opinion, this should be a wake up call to train law enforcement persons in methods that detect sophisticated, fraudulent activities.

In 2015, there were 9 notable seizures of cocaine by law enforcement. Ninety five percent of the cocaine seizures happened within the parish of St. George. Canefield received particular attention with two separate drug seizure operations, at different times of the year. There was an 11 percent increase in cocaine busts in 2016, with arrests being more island wide than the prior year. However, while more weapons were confiscated from 2016 drug stings, much more cocaine was seized in 2015. According to research conducted by the US Drug Enforcement Administration (DEA), particular types of businesses and locations attract drug dealers, even though the business owners have nothing to do with the illicit trade. The research indicated that drug couriers are 90% more likely to transport drugs in vehicles other than their own, thus relying heavily on rented motor vehicles. The study also indicated higher than usual drug related activity around areas like air and seaports, in relation to areas like industrial sites and places of entertainment.

The police conducted three successful operation in 2015 seizing Illegal firearm and ammunition. The year 2015 pales in comparison to 2016. Eight police operations yielded far more weapons seized than in 2015, with the most notable happening at the end of September. On September 30th 2016, a police sting at Woodbridge bay uncovered a barrel full of ammunition and firearms. What is disturbing about this bust is the assortment of weapons, their calibre, and what initiated the very seizure itself. The police received information in advance from US Customs about the barrel which was being shipped. They could therefore act accordingly. However, what if such information was not available, would the weapons have been allowed to proliferate on the streets of Dominica? Or worse yet, what if a group exists within Dominica with the intention to destabilize national security and supposing that they had obtained the weapons? Because of this, we are in favour of stricter measures to check all international-originating packages that arrive on the ports of Dominica. However, the procedures must not sacrifice the expediency process, if it can be helped, in getting the shipment to the consignee.

The most bizarre findings of our research revealed that 12 bodies were found, either partially decomposed or recently dead for the 2016 year. This represents an increase of 300 percent over the previous year. Even more mind baffling is the fact that over 40 percent of the bodies were found between the months of October and December. In 2016, the number of persons who disappeared without explanation quadrupled over the statistics for 2015. In half of the cases of those who disappeared, their bodies were later discovered. The year 2016 also dwarfs the previous year in sudden deaths by 500 percent. There is a recorded 6 cases where individuals just collapsed and died. Over 67 percent occurred in the last quarter of the year.

From our findings, we have pin-pointed specific villages and urban areas for the requirement of focused attention by law enforcement and social/community welfare organizations. For example, the village of Loubiere was a hotbed of activity in 2016 when it came to aggravated assaults. In that instance, we would recommend the setting up of a proper police sub station and increased patrols, both visible and covert. A good police community program in Loubiere will provide more information on the reasons for the upsurge in violence plaguing that area. Another "hot" area is Grandbay. The current police community initiative would have been more effective had it been launched from there, than in Calibishie.

In order to curtail the rising incidents of thefts and robberies, we see the increasing dependence on CCTV systems as necessary. We advise high-at-risk businesses (gas stations for example) to install security alarm systems that immediately alert the police and/or private security should a break-in occur. Of course, this would depend on how quickly and effective a response could be meted by the appropriate security body. Dominica has reached a point of no return in terms of social development. Because of this, law enforcement needs to evolve to match the types of crimes we are seeing. We recommend for an effective system of police informants and under cover police. St. Lucia has an enviable under cover police system where most of the operatives are non-St. Lucian police.

The Commonwealth of Dominica Criminal Investigative Department (CID), needs to be more specialized in their functions. For example, a separate public-accessible phone number and police-authorized database needs to be set up for that section dealing with homicides and/or violent crime, as opposed to the section dealing with vice/sex crimes. These sections need to be more distinct in and of themselves, to the point where they are seen as semi-autonomous departments within the police force. Up-to-date training in forensic techniques and the investment in decent forensic equipment will greatly enhance the functions of the CID.

We are not to the point yet of a complete social breakdown and rampant crime sprees as countries like Honduras and El Salvador have recently experienced. However if we don't act now, we will find ourselves continuing down that road of social and moral decimation which will permanently place us in the global top tenth percentile for crime-ridden countries. It is up to us now to make that change.