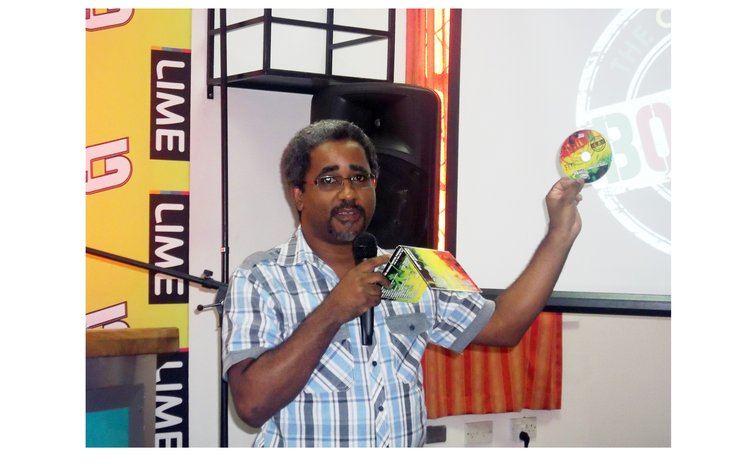 Cornell Phillip at the launch

That nostalgic performance of the Original Bouyon Pioneers from the 2014 LIME Creole in the Park has been captured on DVD.

"Today is a great day for Bouyon Music," said Member of the Original Bouyon Pioneers Cornel Philip said at the launch of the DVD last week. "It's not just a great day but one of the stepping stones in the advancements of Bouyon music and I think it is a product you will be very satisfied with".

"I think there is a recognition from those of us who have been around, especially I believe the people who have been around in the creation of that music, Cornel, Rah and the others, we haven't really treated that piece of work with the level of respect and love that it deserves," Baptiste said. "I think there is a deep recognition that this beautiful piece of work that cannot be argued is a very prominent unique piece of work that is peculiar to Dominica hasn't been met with the passion that it deserves."

Permanent Secretary of the Ministry of Tourism Stephenson Hyacinth said: "The history books record you as the pioneers of Bouyon music, a new genre of music, a mix of traditional and modern music which we call Bouyon, a very apt name that is attached to this country cannot be stolen by anyone else."

Hyacinth added that the pioneers have made their mark as being the originals who have created this genre of music with a distinguish beat.

He then stated that the members should not restrict themselves to producing music locally only but should expand the music their music to the world.

Meanwhile, the Ambassador of the OECS Felix Gregoire stated the pioneers provide a template for the advancement of Dominica's music industry.

"The Original Bouyon Pioneers provides us with a template for the advancement of our music industry creating a quality product, sticking together and working together and building a structure to expose the music to a wider market place," stated Gregoire.

He added that the call is for our musicians to first understand these issues and to work and act together, it cannot be business as usual in this dog-eat-dog industry. He noted that we must be prepared to put in the hard work, there has to be a more a sensible approach to be organized the process of managing and leading our enterprises and music business.