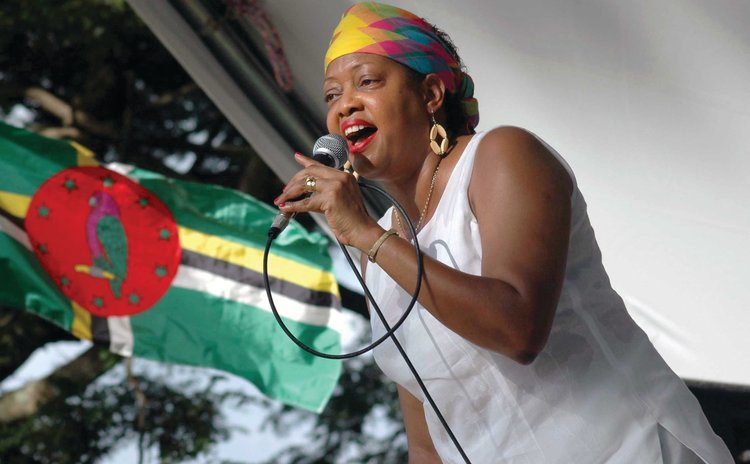 Ophelia performs at Creole in the Park ( Copyright-Sun Photo)

Our Lady of Song, has been heard recently encouraging persons to visit the Nature Isle for its Independence Celebration, particularly for the weekend of the "three nights of pulsating rhythms". "After all promoting my island home and encouraging people to get to know the culture of the people through its music is something that has become my mission," says the Cadence Queen. I am pleased anytime someone recognizes me as the Lady who sings Aïe Dominique, Alwin Bully's Magnificat or McCarthy Marie's Marché con Antillais.

Yesterday, on RCI Martinique, OPHELIA shared some of the excitement building up in Dominica as the nation prepares to host Festival patrons from that island. The station has a daily radio game show with a mystery guest. The object of the game is to guess the identity of the mystery guest. Yesterday's mystery guest was OPHELIA. The public is given clues as to who is the guest for the day by asking questions of the hosts about an event. Yesterday the main clue was the WCMF. When the callers correctly guessed that the event was the Festival they were then asked to name the mystery guest by listening to 10 seconds of the guest speaking. OPHELIA was immediately recognized as the mystery guest. She was then asked to give the audience some reasons why they should visit Dominica for the festival. OPHELIA, in excellent French, gave the Martinique audience a cascade of reasons why Dominica was the place to be for the last weekend in October even if she was not on the bill this year.

Recently at a Conference in Guadeloupe where regional and international representatives discussed the Journey of Older Persons in the COVID pandemic, not only was OPHELIA able to discuss how Seniors fared but also the role that artists played in bringing musical therapy and solace to the nation.

As a member of the Konmité Pou Étid Kwéyòl (KEK), The Independence Committee and the National Cultural Council, the esteemed Lady of Song, plans to recommend Dominica to the public in French Guyana where she will join Les Difficiles as they celebrate their 50 years of Musical strength and perseverance. "Don't be jealous," she says with her beautiful smile, "it's what I do. No-one can take away my mission but the ONE who gave it. I hope to bring back some gold from Cayenne".