Britain, Brexit and an uncertain future 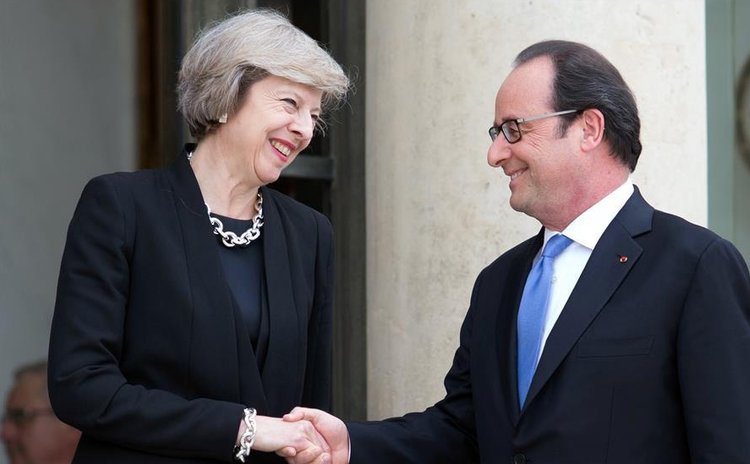 French President Francois Hollande(R) shakes hands with British Prime Minister Theresa May during their meeting at the Elysee Palace in Paris, France on July 21, 2016
By David Jessop

A little over a week ago, the British people went to the polls. Although the snap general election was supposed to strengthen the government's negotiating hand in leaving the European Union, the outcome had the opposite effect, casting uncertainty over the nature of Brexit, and with it the country's future political and economic stability.

It was an election that in its outcome signalled that Britain had become two nations; one committed as it were, to 'make Britain great again' and restoring an imagined past, and another, led by the young, the better educated, those living in liberal cosmopolitan cities, and in Scotland, who saw a very different future, with new domestic and international priorities.

In seeking a much bigger parliamentary majority, Britain's Prime Minister, Theresa May, sought the vote of 'just about managing' voters, but provided few specifics during a remote, Presidential style campaign, that many political commentators described as having been the worst in the UK in decades.

In contrast, the country's Labour Party encouraged the young, often voting for the first time, those in the public sector, the marginalised, and those who wanted a softer form of Brexit, to vote for a more optimistic and less material view of society. They proposed greater social equity, a better funded social welfare system, and an end to huge student debts, at a time of rapidly increasing rents and the unaffordability of housing.

While Labour caught the popular mood through social media and music, wrapped around an unlikely socialist leader similar in many respects to the US Democratic Party Presidential candidate Bernie Sanders, the Conservative Party remained brittle, often aloof, seeming to demonstrate little if any understanding of how to relate to young people.

In the end, Mrs May lost her gamble, ending up without a parliamentary majority, in a hung parliament, with the prospect of significant internal divisions within her own party.

None of this is intended to be partisan, but to suggest that the region takes note, if it has not already, that Britain is changing profoundly, traditional ideological boundaries have become fluid, and the electorate has become volatile and unpredictable.

Strikingly, since the election, Prime Minister May, has seemed unwilling to accept the message of a divided nation, appearing intent on proceeding to govern as planned with the support of a socially conservative party from Northern Ireland, with the likely consequence that divisions over Brexit, austerity and the Union will be exacerbated.

Two events in the coming weeks - the opening of Brexit negotiations with the EU on June 19, and the delayed Queen's speech on June 21 which will set out the Government's priorities - will demonstrate how Mrs May intends to proceed. They will indicate whether the moderating voices of Conservative elder statesmen and some Cabinet Ministers, who want a more coherent and realistic strategy on Brexit, have been taken notice of.

If, as Mrs May and Downing Street suggest, it remains her intention to signal on June 19 that Britain will leave the EU and the single market and end free movement, there is a substantial body of opinion in political circles and the civil service that believes that when it comes to presenting the detailed bills to Parliament for Brexit implementation, she may find it hard to achieve a majority.

In response, and to preserve stability and avoid a rapid collapse in negotiations, a view is emerging that government should now seek a cross-party consensus on alternative approaches to leaving the EU.

In this context, one suggestion that has gained traction since the election is that the UK might leave the EU but try to remain a member of its customs union, while negotiating new arrangements on free movement, and continuing to make a financial contribution.

Such an approach, its proponents argue, would have the effect of ensuring that the UK would have continuing frictionless trade access to the EU, retain jobs, keep in place existing trade agreements such at the EU-CARIFORUM EPA, while enabling the UK to accede to all future EU trade agreements. While it would not allow the UK to negotiate new third country trade in goods arrangements, Britain could in theory negotiate new services agreements. Whether this offers a long-term solution or might ever be acceptable to the EU is, however, far from clear.

All of this is happening as the EU27 is changing. The eurozone economy is recovering rapidly, and is now accelerating at a faster pace than in either the UK or the US.

France, has a new young President, Emmanuel Macron, who is likely this weekend to upend French politics by having 'En Marche!' his one year old political party, take the majority of seats in France's National Assembly.

He has already demonstrated that he will exercise his authority in a style intended to restore France's self-confidence, optimism, and place in the world. He appears willing to act as a buttress against Donald Trump, and to reshape the future of the EU27. With Germany's principled Chancellor, Angela Merkel, who is likely to be returned in Federal elections in November, he is expected to ensure that the EU, despite its many divisions, remains a continuing force in the world.

As for the UK, if it cannot rapidly create a viable economic construct based on a new national consensus on Brexit, the likelihood is that it will be economically diminished for a decade or more; becoming an estranged relative of the EU, increasingly at odds with the US President over all but security co-operation, and in endless trade negotiations with others, including the Commonwealth, that expect such relationships to be reciprocal and mutually beneficial.

From a Caribbean perspective, this means that it will be increasingly difficult to forecast reliably what will happen in its relationship with Britain.

While the UK is not going to walk away from the region, Caribbean concerns, other than climate change and security, look set to become even less of a priority, as all parts of the British establishment become totally engrossed in Brexit, it implications, and trying to stabilise the economy; knowing that at any moment another election might take place.

Previous columns can be found at www.caribbean-council.org June 16th, 2017