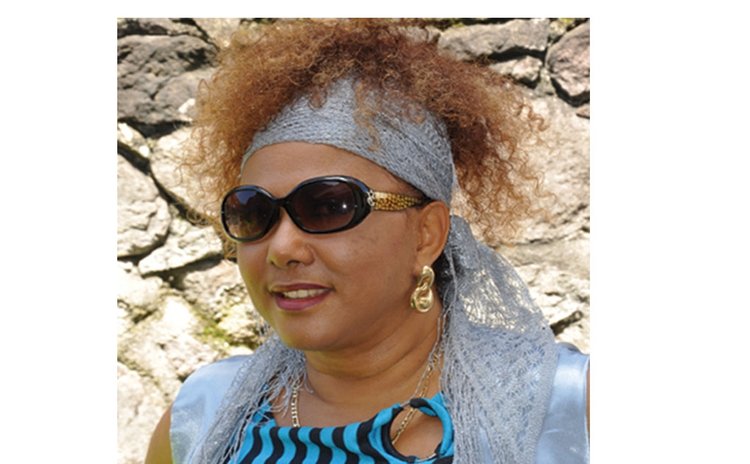 "Can you feel the beat, beat" of her heart? In recent times as Dominica's first female Cadence artiste Janet " Angel" Azzous- Shillingford, who brought you several hit songs in the 70's with Belles Combo and Mantra, is on a new mission to take Cadence to different and more recognizable heights.

Janet, now artistically referred to as "Angel", was a member of fabulous groups such as the Gospel End -time Singers. She is undoubtedly the most diverse female artiste produced by Dominica having recorded in several genres from Ballads, Cadence, Soca , Reggae, Dancehall, Rock and Gospel.

What I find most remarkable about Angel is her incessant thirst and search to bring her craft to heights unknown. Janet, who even preceded Ophelia, even now in her senior years as a singer/ composer who has been involved, in and out, for well over four decades still finds time to "Jumbaylay" and "Work it up" the latter being her own Cadence interpretation of the Triple Kay party number. She also did a similar version with Rah Peters' /WCK 'Our night' in her experimentation- interesting!

I guess what I am saying is that she has not aged and has remained current as her flair, longevity, energy and compositions reflect the vitality of youth. She has found an able partnership in record producer Dada Lawrence who has done a fabulous job at representing the musicianship, creativity and compositions utilizing Cadence as the base. In the true sense Janet de Angel has "Reloaded" and she's back.

The biggest song on her soon to be released EP is "Beat of my heart". Many Dominicans have already been treated to the single along with (her musical contemporary) Hali Abraham's composition of "Mama Zafan" in which she placed second in the NCCU Cadence competition a few years ago. I feel very strong about the marketing potential of the former compositions as it is lyrically strong and emotionally enduring capturing that all important love theme and all the heartaches therein. It has a 'Popish- Blues" feel to it, a rock guitar in there somewhere, brilliant vocals and yet the unmistakable Cadence rhythm driving it to marketable success…I hope.

The album is expected to be varied and is tailored, not just for all age groups, but for the Trinidad market as a producer thinks that's the way to go developing the Bouyon, and indeed Cadence, as a integral part or fusion of the Soca movement as opposed to re inventing the wheel, since Soca is already well entrenched on a global scale. Efforts at promotion I am told, is already moving in such a direction via the TNT market and beyond.

Another song which has an international infectious feel is "Hijack" reminiscent of Peter Tosh's version of " Johnny be good" except this time it is a lamentation of "Tommy" who the song claims to have been on the wrong track as a result of a some spiritual or more appropriately a mental hijack.

A cry to the disc jockey to play the right tracks to evoke that right feeling which will administer emotional healing is another timely composition with wonderful musical arrangements by the producer who infuses the track with Rock and Pop riffs even as the prominence of the cowbell is quite audible- brilliant!

The story lines of the latter two compositions are solid akin to a country- blues ballad. In fact, this is what the NCCU song contest should reflect in the winners. Over the last couple years not much emphasis has been put on creativity, innovativeness, originality and certainly not marketability as has been reflected by the judges' results in the individual section.

Notwithstanding, the recording introduces a new brand of Soca music as Janet "Angel" Shillingford "moves to the left and right" and even during a rain day "heating up de place, everybody wet, wet, wet they just want to fete" a spicy party Soca rendition followed by two more bouncy numbers with what is labeled as 'Burning up' with a positive message to avoid conflict and confusion.

Continuously, "Angel" is recording, searching, growing, as she works with her producer to define and create that niche for herself and the Nature Island ironically after being touted as the creators of Soca, Cadence, Bouyon and even Zuke.

One thing is certain; this direction had been hinted sometime ago with Exile's "Fresh" Grammax's 'cauchemar' and Michele's " Home" as the way to go, if Cadence is to one again represent prominently in this new musical dispensation-Angel seems to be hitting the right buttons!