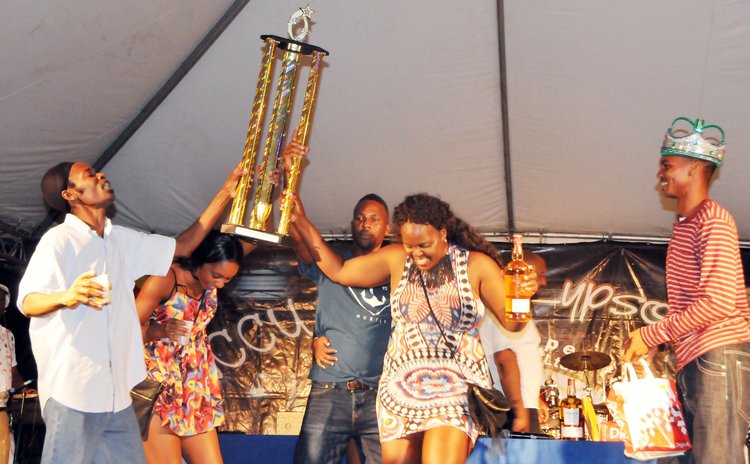 Yes readers, you have heard me refer to this more than once but after hearing NCCU's announcement for registration of song for this years' Cadence song contest once more, I shudder.

Why you may ask? Well, two from two is zero and that's where we are heading not too long from now, if we do not see any band or artiste to accept the torch from Ophelia or Chubby (both in their 60's) and run with it.

Surely, there is great hope in Michele Henderson-Delsol but she can't carry this cross alone and given the direction that her career has begun to take with Jazz, Ballads, Hip hop and such collaborations, particularly in the USA, the focus, compared to five years ago, does not suggest …Cadence.

Yes, we hear, and research indicates, that the music still has popular appeal in the Francophone world and some parts of Africa as far as La Reunion and Angola, but as music business practitioner Mark Marie lamented on the Vibes Radio programme Rhythm & Rhyme, hosted by yours truly, it is indeed sad to see that our youth focus is the USA.

Everyone is trying to be a Michael Jordan or Lebron James when realistically and statistically, there is a greater possibility of achieving the greatness of Brian Lara or Chris Gale for a Dominican or Caribbean sportsman or woman. Just as it is easier for a Dominican singing talent to become a Jeff Joseph, Gordon Henderson, an Ophelia, than a Rihanna based on our physical proximity to the French market (which is a gateway to France itself and eventually Europe).

We unwittingly are being influenced by American TV, we see the bling of the rappers, the cars, the women and the money and think, hope and dream that we will be there someday. Nasio Fontaine is as good as any Jamaican artiste and better than most. While he has made some name for himself in Africa and certain quarters and may be satisfied with his successes or view it not in monetary terms, has he stamped his authority in Jamaica or Europe?

It may still happen if he becomes more prolific and is managed and marketed properly, but we can't hold our breath as the Jamaicans we so stoutly embrace won't give him a chance to do so. They are too proud for this; the next Marley would be seen probably in the consciousness of a Kronix, perhaps another Jamaican, but no one else.

What will it take for the Dominican artistes who jump at every opportunity to sing Reggae, put on locks, even change to the Jamaican lingua, as Nasio and Colton T have portrayed, just to be accepted, to be like the Jones, only to find that they never get to grace a Jamaican stage or may never? Swinging Stars only went to Jamaica once in their history yet Byron Lee and the Dragonaires of Jamaica, their counterpart, has been accepted all over the Caribbean as Soca giants.

Hundreds of Jamaicans have performed in Dominica but nothing is reciprocated and we talk about Caribbean integration. Dominicans cannot count on their ten fingers the number of engagements done by locals in Jamaica, yet we can boast of hundreds of Jamaican shows over four decades, thanks to our promoters from Loftus Emmanuel and Eddy Toulon to our present day WCMF and Mirror Promotions.

Jamaica's music has stormed the globe and is internationally accepted and so we are doing ourselves no favours by forsaking our own that had and may be still have international appeal. The question is who are our young people targeting? Are we living in a fool's paradise, feeding off crumbs from the table? Are we satisfied to be just making up space for the real Jamaican act showcased or are we the real deal? Well, in my opinion we can be, but must choose our musical battles well. Already leading promoters like Dada and others seem to be on the Soca train, suggesting that we should pull Bouyon in its direction.

This is another matter I have previously addressed but for now it would seem that no one is concerned that from the bowels of Cadence the WCMF was born and no new artiste or band seem willing to procreate the music. It is quite evident that the band most poised to do so is promoting an Xtacy of Haitian Compa, while they and others wait for the staged NCCU event to preserve Cadence music, the fast becoming dinosaur…pull up!