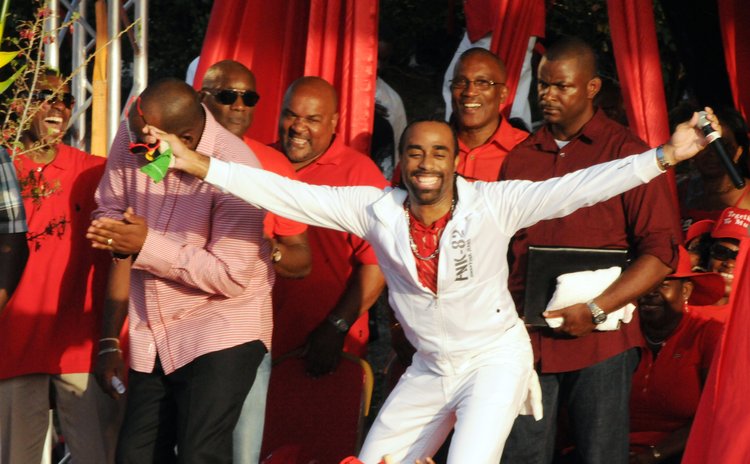 Daddy Chess, in white, performs at the rally
By Ian Jackson

There has been lots of speculation, innuendo and inferences as politics and the looming elections, constitutionally due by May 2020, heats up. Aspersions, calculations seem to have been completely left out from whose hands the final decision lies.

Already some may be saying this guy is mad, it's the PM's decision. But I beg to defer. As it always should be, the people decide but the PM makes the disclosure. Every astute politician has never attempted to call elections between January and April. This first quarter of the year, it just can happen as culture and religion would dictate. It has nothing to do with who is the Prime Minister.

No politician, or more-so ruling party, wants to be the object of ridicule and so they avoid the pen of writers and the tongue of calypsonians who it was said, a few decades ago, could make or break governments. Though it must be noted in recent times that there seem to be a disconnect between the people's thoughts and verbalized expression and how they vote.

Spider's "Hypocrites" and NC's "Mamo doe rock de boat" hurt the Freedom Party while "Tiway yo" performed the final rites. Hunter's "They Joking Carl" did the same to the Worker's Party, "Grave Digger" by Zye dug a hole for Labour Party but when it came to the onslaught by King Dice "Trade House dot com" or " It's Time for Change" it did not seem inevitable in that instance and even seem to embolden, some may argue.

Though Brakes cried out for "Workers" he still had to be contrite and admit "and still the people vote for de shoe" in one of the country's greatest road marches ever.

Something happened that year and the marriage between Calypso, politics and elections moved further apart. Calypso became mere entertainment and not a valuable barometer of political support or admonition to politicians.

Thousands jump to King Dice and those thousands will whine into the voter's booth to vote for what was deemed to be wrong as delivered in song. Hence one must conclude that either these songs do not really reflect the feeling of the masses, or as King NC advanced in a recent interview that people just love Dice or people just see Calypso as a staged event, divorced from life's realities. So no matter how many calls are made to "Take out the teeth and dem" they become more entrenched notwithstanding the bracers and filings.

Having said the above, it had been out of the norm but two elections have been held in December. So at present that is as far as Calypso will allow. It must be held before the Quarters in January or after Lent in April. This quarter in the calendar is "Holy Ground" for politicians even if the recent trends indicate a dichotomy between the way voters vote and the lyrics they gravitate too.

However, the astute follower of unfolding events strongly suggest that nine out of ten times the election call this time will go down to the wire. It must be done in December at the earliest; long before the three wise men begin following the star in the East and the season of goodwill dawns.

If posture and biblical pronouncements are anything to go by, a Ministry of Ecclesiastical Affairs and chants of "God is Good" from the platform would suggest that politicians would be cognizant of the season of Lent and would avoid a prolonged campaign during that time. Therefore, it promises to be intense, savage and brief. Nor would it be prudent for elections be held between September and November for obvious reasons: opening of school, the tourist season and count-down to the WCMF suggest elections fever and campaigning do not make good bedfellows.

Calypso and traditions therefore will determine and not necessarily elections in December 2019 or May 2020; Calypso wears the pink shoes, believe it or not. No matter how the polls go this time around, Calypso will certainly make and if not break, at least bend governments and politicians on both sides of the coin. As the multitude of issues in compositions are penned, politicians, I am sure, anticipate that this time lyrics are likely to influence the electorate just as in the days of NC, Spider, Scrunter and when Dice's " Animal farm" of politicians, are thrown into focus.