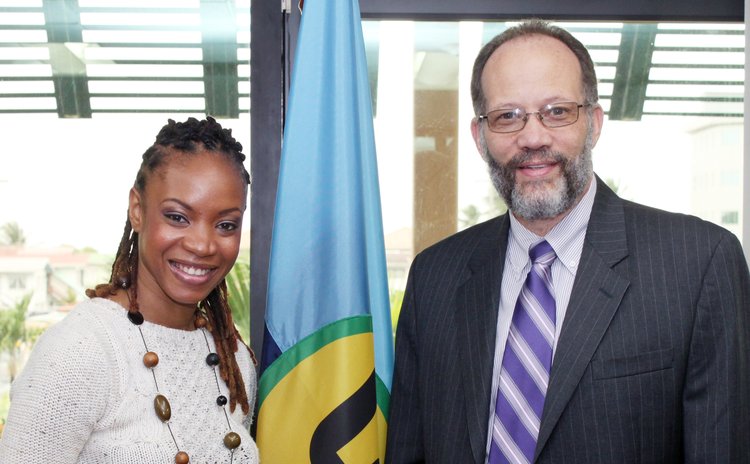 The multi-talented entertainer is currently visiting Guyana as the headline performer for a Jazz Wine and Words Festival on Saturday June 14.

Henderson was warmly welcomed to the Secretariat as she met members of the CARICOM Staff who wished her hearty congratulations.

'Celebrating CARICOM' is the aptly chosen title of the new CARICOM Song/Anthem which will be launched at the upcoming CARICOM Heads of Government Meeting to be held in Antigua and Barbuda July 1-4, 2014. The second placed entry 'My CARICOM' came from Jamaican Adiel Thomas and the third placed 'One CARICOM' was by Carmella Lawrence from St. Kitts and Nevis.

The winning entries were selected from a competition which was launched in April 2013 with the involvement of artists, the private sector and directors of culture across the region as part of the CARICOM's fortieth anniversary celebrations.

The competition was aimed at selecting a CARICOM Song that would promote unity and build consciousness around Community values and inspire CARICOM identity and pride. The song is expected to be regionally and internationally recognized and is to be used primarily at ceremonial and Community events.

The competition was conducted in three rounds. In the first round competitors were asked to send their entries to the Ministry responsible for culture in their country. A national selection was done from which the best six songs were to be submitted to the CARICOM Secretariat. Thirteen Member States and two associate members participated in the competition and a total of sixty four entries were received by the Secretariat. A regional panel of judges adjudicated the second and the final rounds.